Waterloo Bridge is a road bridge across the River Thames reaching between The Strand (between Westminster and (the City) on the Middlesex bank and Waterloo Station in Southwark on the Surrey bank, Downstream stands Blackfriars Bridge and upstream Hungerford Bridge.

Thanks to its location at a strategic bend in the river, the views from the bridge (of Westminster, the South Bank and the London Eye to the west, and of the City of London and Canary Wharf to the east) are widely held to be the finest from any spot in London at ground level. 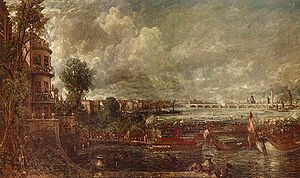 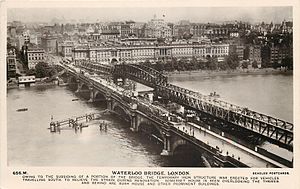 The first bridge on the site was designed in 1809–10 by John Rennie for the Strand Bridge Company and opened in 1817 as a toll bridge. It was a granite bridge, built of stone from quarries at Mabe in Cornwall,[1] with nine arches, each of a 120-foot span, separated by double Doric stone columns. The whole bridge was 2,456 feet long, including approaches (1,240 feet between abutments) and 42 feet wide between the parapets. Before its opening it was known as the Strand Bridge.

During the 1840s the bridge gained an ill reputation as popular place for suicide attempts. In 1841 the American daredevil Samuel Gilbert Scott was killed while performing an act in which he hung by a rope from a scaffold on the bridge.[2] In 1844 Thomas Hood wrote the poem The Bridge of Sighs, which concerns the suicide of a prostitute there.[3]

Paintings of the bridge were created by the French Impressionist Claude Monet and the English Romantic John Constable.

The bridge was taken into municipal ownership in 1878 and placed under the control of the Metropolitan Board of Works, which removed the toll from it.

Michael Faraday tried in 1832 to measure the potential difference[4] between each side of the bridge caused by the ebbing salt water flowing through the Earth's magnetic field.[5]

From 1884 serious problems were found in Rennie's bridge piers, after scour from the increased river flow after Old London Bridge was demolished damaged their foundations. By the 1920s the problems had increased, and settlement at pier five necessitated the closure of the whole bridge while some heavy superstructure was removed and temporary reinforcements were put in place.[6]

In 1925, a temporary steel framework was built on top of the existing bridge and then places next to it for the use of southbound vehicles.[7] 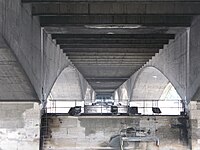 The underside of the bridge

In the 1930s the council decided to demolish the bridge and replace it with a new structure designed by Sir Giles Gilbert Scott. The engineers were Ernest Buckton and John Cuerel of Rendel Palmer & Tritton. The project was postponed on the outbreak of the Second World War.

Scott, by his own admission, was no engineer and his design, with reinforced concrete beams under the footways, leaving the road to be supported by transverse slabs, was difficult to implement. The pairs of spans on each side of the river were supported by beams continuous over their piers, and these were cantilevered out at their ends to support the centre span and the short approach slabs at the banks. The beams were shaped "to look as much like arches as ... beams can".[6] They are clad in Portland stone, which cleans itself whenever it rains.[8] To guard against the possibility of further subsidence from scour each pier was given a number of jacks that can be used to level the structure.[6]

The new bridge was partially opened on Tuesday 11 March 1942 and "officially opened" in September 1942.[9] However, it was not fully completed until 1945.[10] It is the only Thames bridge to have been damaged by German bombers during the Second World War.

The building contractor was Peter Lind & Company Limited. It is frequently asserted that the work force was largely female and it is sometimes referred to as "the Ladies' Bridge".[11][12]

Reuse of the original stones

Granite stones from the original bridge were subsequently "presented to various parts of the British world to further historic links in the British Commonwealth of Nations". Two of these stones are in Canberra, the capital city of Australia, sited between the parallel spans of the Commonwealth Avenue Bridge, one of two major crossings of Lake Burley Griffin in the heart of the city. Stones from the bridge were also used to build a monument in Wellington, New Zealand, to Paddy the Wanderer, a dog that roamed the wharves from 1928 to 1939 and was befriended by seamen, watersiders, Harbour Board workers and taxi drivers. The monument, built in 1945, is on Queens Wharf, opposite the Museum of Wellington City & Sea. It includes a bronze likeness of Paddy, a drinking fountain and drinking bowls below for dogs.[13][14] 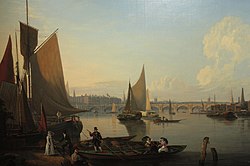 The south end of the bridge is in the area known as the South Bank, which includes the Royal Festival Hall, Waterloo station, Queen Elizabeth Hall and the Royal National Theatre, as well as the National Film Theatre, which is directly beneath the bridge.

In the 1980s the award-winning Museum of the Moving Image was also built directly underneath the bridge and became perhaps the only museum in the world to have stalactites growing within it, from water leaking through the bridge.

The north end of the bridge passes above the Victoria Embankment where the road joins the Strand and Aldwych alongside Somerset House. This end housed the southern portal of the Kingsway Tramway Subway until the late 1950s.

The entire bridge is a Grade II* listed structure.[15]

Georgi Markov, a Bulgarian dissident, was assassinated on Waterloo Bridge on 7 September 1978 by agents of the Bulgarian secret police, the Committee for State Security, possibly assisted by the Soviet security agency, the KGB.[16]

Robert E. Sherwood's play Waterloo Bridge (1930), the story of a soldier who falls in love and marries a woman he meets on the bridge in an air raid during the First World War, was made into films by the same name released in 1931 and 1940, and in 1956 as Gaby. The 1940 film starred Vivien Leigh and Robert Taylor.

"After the Lunch", a poem by Wendy Cope about two lovers parting on Waterloo Bridge, now forms the lyric of the song "Waterloo Bridge" by Jools Holland and Louise Marshall.

The bridge features in scenes at the beginning and end of the film Alfie (1966), starring Michael Caine. In the final scene of the film the title character is seen crossing the bridge followed by a stray dog.[17]

The song "Waterloo Sunset" by the British band The Kinks tells of living in London and watching life from Waterloo Bridge.

A scene in "The Great Game", an episode of the BBC television series Sherlock, takes place beneath the bridge's northern side, where members of Sherlock's network of homeless informants congregate.[18]

The bridge is mentioned in Jeff Wayne's Musical Version of the War of the Worlds in the song "Forever Autumn" as being destroyed by Martian tripods.

Looking east from Waterloo Bridge at night: the City of London north of the river; the illuminated National Theatre is along the South Bank