Southwark Bridge is an arch bridge across the River Thames in London, carrying the A300 road traffic over the river linking Southwark in Surrey with the City of London in Middlesex.

This bridge has the lowest traffic utilisation of any bridge in central London.

A previous bridge, designed by John Rennie, opened on the site in 1819 and was originally known as Queen Street Bridge, as shown on the 1818 John Snow Map of London. The bridge consisted of three large cast-iron spans supported by granite piers. The bridge was notable for having the longest cast iron span, 240 feet, ever made. It was a commercial tolled operation which was trying to compete with the toll free Blackfriars and London bridges nearby, but the company became bankrupt and its interest were acquired by the Bridge House Estates which then made it toll free in 1864.[1]

A new bridge on the site was designed by Ernest George and Basil Mott. It was built by Sir William Arrol & Co. and opened in 1921.[2]

The plaque on the west side of the bridge

Halfway along the bridge on the Western side is a plaque which is inscribed:

The bridge provides access to Upper Thames Street on the north bank but due to the 'ring of steel' security barrers there is no further road access to the City and the north.

The bridge is owned and maintained by Bridge House Estates, a charitable trust overseen by the City of London Corporation. The current bridge a Grade II listed structure.[3]

Southwark Bridge from the south bank 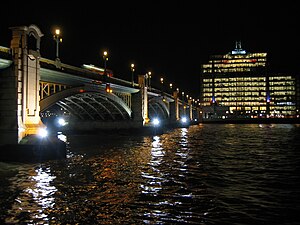 At the north-west side is Vintners Court, a 1990s office block which has a classical façade of columns and pediment; this was developed on the site owned by the Worshipful Company of Vintners whose Hall is behind it on Upper Thames Street.[4]

The south end is near the Tate Modern, the Clink Prison Museum, the Globe Theatre, and the Financial Times and Ofcom buildings. Below the bridge on the south side are some old steps, which were once used by Thames watermen as a place to moor their boats and wait for customers.[5]

Below the bridge on the south side is a pedestrian tunnel, part of the Queen's Walk Embankment, containing a frieze depicting the Thames frost fairs.[6]

In the 1964 Disney film Mary Poppins, the Banks family mistakenly think that George W. Banks has committed suicide by jumping off the bridge after he is fired from his job at the bank.

Southwark Bridge appears in many films, including Harry Potter and the Order of the Phoenix (2007).

The cream painted houses on the south side of the bridge, Anchor Terrace, just after the FT building, were used for the exterior shots of the shared house in This Life.

The 1819-1920 "Iron Bridge" is mentioned in the first sentence of "Our Mutual Friend" by Charles Dickens, and several times in his "Little Dorrit", where in Chapter 18 he identifies the toll as being one penny.