Crickhowell is a small town in the mountains in Brecknockshire. It stands on the River Usk, on the southern edge of the Black Mountains and in the eastern part of the Brecon Beacons National Park. The town has a population of around 2,800 people.

Much of the surrounding countryside, over 20,000 acres, forms part of the Glanusk Park estate.

The name Crickhowell is taken from that of the nearby Iron Age hill fort of Crug Hywel above the town.

The town stands on the River Usk, which is bridged by an elegant seventeenth-century stone bridge with its odd arches (twelve on one side, thirteen on the other). A seat is built into the walls.

Also within the town are the 14th-century parish church of St Edmund, and the ruins of Crickhowell Castle on the green "tump" beside the A40 Brecon to Abergavenny road.

There is some light industry on the outskirts of Crickhowell at the Elvicta Industrial Estate. The town centre includes a variety of traditional family-owned shops. 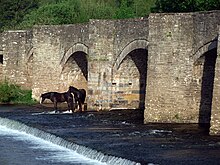 Detail of the bridge

Crickhowell's most famous son was the mapping expert Sir George Everest (1798–1866) after whom Mount Everest is named. He was born at Gwernvale Manor near Crickhowell and rose to become Surveyor-General of India, earning the respect which inspired his surveyors to name the highest mountain in the world after him.

Admiral John Gell, after over thirty years at sea in the Royal Navy. died here in 1806, far from the sea which had been his home.

Today, Crickhowell is a popular tourist destination. In 2005 a Tourist Information centre was built in the centre of town and during summer the town is notably busier. Most people visit Crickhowell to see the Black Mountains and the Brecon Beacons, and maybe enjoy some mountain-biking, camping, hillwalking, rock climbing, fly-fishing, hang-gliding, caravanning or simply tour the area by car staying at Bed-and-breakfasts. 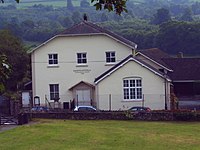 The churches in Crickhowell include:

Crickhowell castle was initially a motte-and-bailey castle built from 1121, probably by Robert Turberville of the family of Norman Lords, at this time a tenant of Bernard de Neufmarche, Hugh Turberville holding the castle from 1273 not as tenant-in-chief but as mesne lord. Hugh Turberville was Seneschal of Gascony whose services were called upon by King Edward I to train Welsh men-at-arms and transform the royal levy into a disciplined mediæval army capable of conquering Wales. Hugh led both cavalry and 6,000 infantry recruited in the Welsh Marches for King Edward's forces. He was later a Deputy Constable and later Constable of Castell y Bere in Merionethshire. He fought against Rhys ap Maredudd during his rising from 1287 to 1291. He died in 1293 the last of the family in the direct line.

The castle was refortified in stone from 1242 when Sybil Turberville a Turberville heiress married Sir Grimbold Pauncefote or Paunceforte. The castle was walled with substantial stone towers and a large bailey, a home castle befitting an important Royal ally in Wales.

The castle was in the hands of the powerful Mortimer family dynasty of Marcher Lords and in the 14th century and declined as a smaller holding within a large portfilio of lands, titles and larger castles.

The castle was refortified on the Royal command of new King King Henry IV in 1400 and carried out by Sir John Pauncefote, great grandson of Sir Grimbold, in advance of the uprising led by Owain Glyndŵr to 1412.

The castle was largely destroyed in the early 15th century by Owain Glyndŵr's forces, who also attacked and burned Abergavenny town and other settlements in the area. The ruined stone double tower still stands on the Castle Green.