Armley is a district in the west of Leeds in the West Riding of Yorkshire. It starts less than a mile from Leeds city centre. Like much of Leeds, Armley grew in the Industrial Revolution and had several mills, one of which houses now the Leeds Industrial Museum at Armley Mills. Armley is predominantly and historically a largely working-class area of the city, still retains many smaller industrial businesses, and has many rows of back-to-back terraced houses. 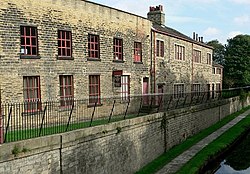 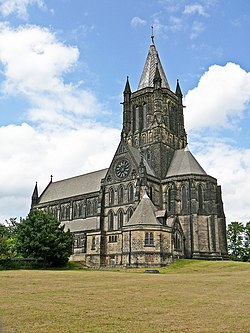 Armley is mentioned in the 1086 Domesday Book reference to "Ristone, Ermelai". At the time there were eight villagers in Ristone (now east Armley) and Ermelai (now west Armley).[2] The actual population is indeterminable as this only accounts for the 'head of household'.[3]

Armley Mills, now the Leeds Industrial Museum at Armley Mills, was the world's largest woollen mill when it was built in 1788. In the 18th and 19th centuries Armley was, through its mills, a major contributor to the economy of the city of Leeds. Many of the buildings standing in and around Armley were built in the 1800s, including many of the churches, schools, shops and houses. Ledgard Way is named after the entrepreneur Samuel Ledgard. Armley also has picturesque views over the rest of Leeds from certain vantage points. William Tetley started his business of malters in Armley in the 1740s. His grandson Joshua Tetley founded Tetley's Brewery in Hunslet in 1822.[4]

Damage caused by a raid in the Leeds Blitz in March 1941[5] and later slum clearance schemes brought about the redevelopment of much of Armley in a programme beginning in the 1950s and finishing in the early 1970s.

From the 1870s until 1956, Armley was home to the J W Roberts asbestos mattress and boiler lining factory. This facility exposed residents to asbestos fibres and resulted in a mesothelioma cancer cluster which persists to this day. One of the victims June Hancock launched a court action against Turner & Newall, the company that owned the J W Roberts' factory in 1993. Although the court case was successful, corporate restructuring had, as of 2005, avoided the case being settled.[6] Hancock's story was the subject of a play, Dust, by Kenneth F. Yates, performed in Armley and at the West Yorkshire Playhouse in July 2009.[7]

The parish church, St Bartholomew's, is home to a notable pipe organ built by the German organ builder Edmund Schulze. Originally built for Meanwood Towers in 1866-69, it was opened by S.S. Wesley. It was moved to St Bartholomew's in 1879. Schulze's work, and this organ in particular, had enormous influence on the development of British organ building in the 19th century. Both church and organ have been restored.[8] The smaller Christ Church is located at the end of Theaker Lane nearer the centre of Armley.

Legend has it that a pedlar called Charlie used to rest and water his pony and trap in Whingate Park in the 19th century. He apparently sold spicy shortbread to the citizens of Upper Armley for 1d a piece. Today the triangular-shaped park is known as Charlie or Charley Cake Park. According to Armley Through the Camera, written in 1901, the park was "within memory of many present residents of Armley, a patch of wasteland. Some of them regularly played cricket on its turf"[9]

Armley is located between the M621 motorway and the River Aire, stretching from roughly the New Wortley roundabout (the Armley Gyratory) to the start of the Stanningley By-pass and Cockshott Lane where it merges into Bramley.

Armley Town Street includes high street names, charity shops and food and independent retailers. There are bus links to Leeds, Bradford, Halifax and Huddersfield. Armley's Town Street has free off-road car parking, but parking is mainly on-street, with few car parks in the centre. Armley's only supermarket is a LIDL on Armley Road, neighbouring Wortley has an Asda and Bramley has Tesco, Aldi, Morrisons and Farmfoods. Towards Farnley there is a Sainsburys. The former Kwiksave store in Pudsey is now a branch of Sainsbury's; a previous Somerfield store is now a Co-operative. 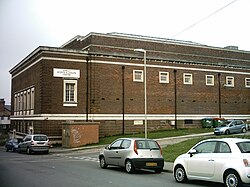 Other amenities include Armley (Gott's) Park, Gott's Park Golf Club and Armley Mills Industrial Museum, and numerous former cinemas and churches. The old Methodist chapel is now a carpet outlet, like a similar chapel in Holbeck. There are present-day Methodist churches in Wesley Road, built in 1987,[11] and in Whingate, built in 1884.[12] The Wesley Road Chapel is a Local Ecumenical Partnership also involving the Baptist and United Reformed Churches.[13] The current church is the fourth on this site, where the original Methodist Wesleyan chapel stood and where John Wesley once preached.[11]

Armley's original leisure centre, based on the old Armley swimming baths, was demolished in 2009. The land is now a large car park for the new leisure centre. The closure of the original 25-metre swimming pool with redundant and unused space attracted some controversy because of the age and local architectural significance of the building. The new centre has state-of-the-art equipment. Morley and Beeston will also receive new leisure centres under a programme being run by Leeds City Council. 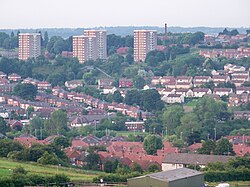 A view of Western Armley

There is much council housing, although most of the housing stock is privately built and dates from the 1960s. Back-to-back housing has been converted to through terraces.

Corporation residential tower blocks, built to replace older housing stock at the centre of Armley, and neighbouring Wortley, are amongst the tallest in Leeds.

The tank scene in the 1963 film Billy Liar was filmed in Wellington Road, Armley, and local residents were used as extras.