Morley is a market town in the West Riding of Yorkshire, about five miles south-west of Leeds city centre. The town is built on seven hills (though there its resemblance to Rome finishes), named Scatcherd Hill, Dawson Hill, Daisy Hill, Chapel Hill, Hunger Hill, Troy Hill and Banks Hill.

Morley is first mentioned in the Domesday Book of 1086, as Morelege, Morelei and Moreleia. The name is the Old English mor leag, meaning "Moor Green" (The word leag means open ground, pasture or clearing.) The town has given its name to the Morley Wapentake, which might have met at Tingley (a name meaning "Council Green").[1]

The town was later famous for its textile industry, notably the cloth, shoddy, which was worn by both sides in the American Civil War.

A town council was established in 2000, reviving some of the traditions of the old municipal borough of Morley. The town's coat of arms featured the symbolic principal industries of the municipal borough: textile manufacturing, coal mining and quarrying. 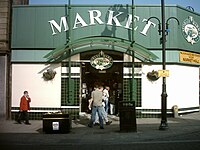 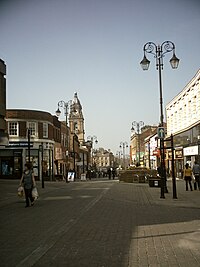 The parish church is St Peter's.

Morley Market has been a feature since the town was formed. Now with more than trading units, the market building has a large trading hall split up into units housing fruiterers, delicatessens, butchers, fishmongers, fashion shops and a café.

Morley Town Hall stands in the middle of the town. It is sometimes used for music recordings. Television programmes such as Heartbeat and Emmerdale have used its disused magistrates court and a cobblestoned street to one side. It hosts concerts by local schools and performances by the Morley Amateur Operatic Society, whose pantomimes have taken place at the Alexandra Hall for many years.

There are three supermarkets in the Morley area and a range of independent and charity shops in its high street.

Scatcherd Park in the centre of Morley, by the Morley Leisure Centre, has a large playing field, a skate park, children's park, bowling green and memorial gardens. Events are held on the adjoining field in the summer months.

The radio station Real Radio Yorkshire is based in nearby Tingley, close to Junction 28 of the M62 motorway.

On 21 February 2010, a statue of Ernie Wise was erected outside Morley Post Office and unveiled by his widow, Doreen.[2][3] Ernie had performed in the old nearby cinema, just around from the Post Office, of which is no longer in use and now derelict.

Morley railway station is half a mile from the town centre on the Huddersfield Line. There is a service seven days a week to and from Leeds.

The M621 motorway runs to the west of the town and the M62 motorway to the south. Junctions 27 and 28 of the M62 are closest to Morley.

In books and on film