Not to be confused with Aldbrough

Aldborough is a village in the West Riding of Yorkshire, close to Boroughbridge.

Aldborough was built on the site of a major Romano-British town, Isurium Brigantum and it served during the Roman age as the capital of the Brigantes, the tribe which dominated the north of Roman Britannia. Isurium may also have been the base of the Roman Legio VIIII Hispana.

Aldborough was built on the site of a major Roman town, Isurium Brigantum, which marked the crossing of Dere Street, the Roman Road from York north to the Antonine Wall by way of Corbridge and Hadrian's Wall. After AD 160, Isurium was the administrative centre of the Brigantes, the most populous British tribe in the area at the time of the Roman occupation. The Aldborough Roman Site museum, run by English Heritage, contains relics of the Roman town, including mosaic pavements. 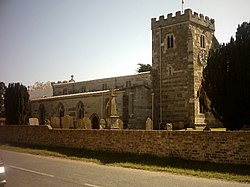 Aldborough was mentioned in the Domesday Book as Burgh (Old English burh 'ancient fortification'). By 1145 the prefix ald (old) had been added.[1]

Aldborough lost much of its importance when the river crossing was moved to Boroughbridge in Norman times. In the Middle Ages it was made a Parliamentary Borough, and returned two Members of Parliament until the seat was abolished in the Great Reform Act of 1832.

Aldborough forms a large ancient parish, which include townships in both the West Riding and in the North Riding. In the West Riding the parish includes Aldborough, Boroughbridge, Minskip and Roecliffe. In the North Riding the parish includes Ellenthorpe. Lower Dunsforth, Upper Dunsforth, Humburton and Milby are shared between the Ridings.[2] All these places became separate civil parishes in 1866.[3]