Milby is a hamlet and civil parish in Yorkshire, situated to the immediate north of Boroughbridge. The civil parish corresponds to the township, divided between the ancient parishes of Aldborough, in the West Riding, and Kirby Hill in the North Riding.[1] It became a separate civil parish in 1866.[2].

The Roman road, Dere Street crossed the River Ure at Milby. Until the mid 19th century, the old wooden bridge remains could still be seen.[3]

The village is mentioned in the Domesday Book as Mildebi in the Hallikeld hundred. The lands were the possession of the Crown both before and after the Norman invasion.[4]

The Pilmoor, Boroughbridge and Knaresborough Railway, a branch line of the North Eastern railway, ran through the parish. The line ran from Pilmoor Junction on the East Coast Main Line near Easingwold to Knaresborough via Boroughbridge. Opened in 1847, it closed in 1964. The Old Station House is a Grade-II listed building.[3][5][6][7] 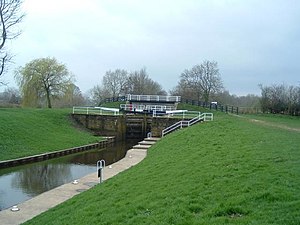 Milby Lock on the River Ure

The village lies on the north bank of the River Ure. In order to make the river navigable past the weir at Boroughbridge, a three-quarter mile cut was made from Milby, including a set of locks, to Langthorpe.[3]