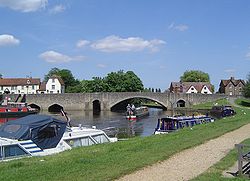 Burford Bridge at Abingdon from downstream

Abingdon Bridge crosses the River Thames at the town of Abingdon, Berkshire. It carries the A415 road from Abingdon to Dorchester, Oxfordshire, over the reach of the Thames between Culham Lock and Abingdon Lock.

The bridge is actually two bridges, linked by Nag's Head Island. Abingdon Bridge is the northern part towards the town which has six arches and crosses the backwater and mill stream between Berkshire and Oxfordshire. The southern part is entirely in Oxfordshire. Technically called Burford Bridge, it has one main arch and four minor arches at the river and two minor arches on the floodplain. This crosses the main navigation channel. Furthermore, to complete the Thames crossing, Culham Bridge crossing the Swift Ditch should also be considered as an extension.

Abingdon Bridge was begun in 1416 and completed in 1422,[1] using local limestone quarried at Besselsleigh and Dry Sandford.[2] The bridge was funded by Abingdon's |religious guild, the Fraternity of the Holy Cross, and chiefly by two of the guild's members: a London merchant called William Hales and his wife Maud.[1] The bridge replaced a ferry[2] and its completion severely reduced trade at Wallingford.[3]

In 1453 "three new arches" were added at the southern end of the bridge,[3] this becoming known as Burford Bridge. This description makes no reference to the two pairs of much small arches to each side of the central arches. In 1548 during the Edwardine Reformation the Crown suppressed the Fraternity of the Holy Cross.[1] In 1553 a Royal charter founded Christ's Hospital to replace the guild and take over most of its property and functions, including custody and maintenance of Abingdon's bridges.[4]

In 1790, when Abingdon Lock was opened, the Thames Navigation Commission had one of the arches closest to Nag's Head Island widened and raised to ease navigation.[5][6] The width of the arch was increased to 20 ft, and the airdraught was increased by 4 ft at the crown of the arch and 6 ft at the sides.[6] Enlargement changed the arch from a late mediæval 15th-century pointed profile to a Georgian elliptical one.[2]

Early in the 19th century the bridge was widened piecemeal. The Governors of Christ's Hospital had the Maud Hales Bridge widened in 1800 and the Hart Bridge in 1818–19.[1] The Trustees of the Fyfield Turnpike had Culham Bridge and the remainder of Abingdon Bridge widened in 1829–30.[1]

The bridge was rebuilt again in 1927, this time by the County Councils of Berkshire and Oxfordshire, with J. J. Leeming as resident engineer.[7] Three of the early 15th-century arches were demolished and replaced with one wide span to further ease navigation.[8]

There have been reported sightings of the ghostly apparition of an unidentified woman's head and arms beneath the water flowing under the bridge.[9]