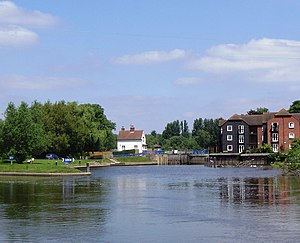 Sandford Lock is a lock on the River Thames in Oxfordshire, situated at Sandford-on-Thames, just south of Oxford. The first pound lock was built in 1631 by the Oxford-Burcot Commission although this has since been rebuilt. The lock has the deepest fall of all locks on the Thames at 8ft 9in and is connected to a large island which is one of three at this point.

The main weir connects the second island to the opposite bank on the Kennington, Berkshire side. This is the location of the infamous Sandford Lasher, a treacherous weirpool where many have drowned. Another weir links the two lower islands.

There was a mill here built by the Knights Templar in around 1294. There are also records of a ferry and a fish weir in mediæval times. In the reign of Edward III there is an account of the immemorial conflict between millers and bargemen when "the men of Oxon broke down the locks of Sandford". This was probably at the navigation weir or flash lock on the old river channel behind the second island. This was described in 1624 as 'Great Lockes'. It was replaced in 1631 when the Oxford-Burcot Commission built one of the first pound locks here. The lock was passed on to the Thames Navigation Commission in 1790 and lengthened in 1795, under the direction of Daniel Harris, the Oxford gaoler, at a cost of nearly £1,800. In 1836 a new lock was built on the current site alongside the old one and a lock house was ordered in 1839. The old lock has since been filled in after an incident when a miller opened the sluices and caused damage to the embankments. Its position is still visible (the position of the upper gates can be seen in the stonework above the present upper gates). An iron bridge above the lock was built between 1866 and 1877.[1] The latest rebuild of the lock was in 1972.

The pool below the weir, known as Sandford Lasher, has been notorious since the 19th century because of the number of individuals who have drowned there. Weirs, like the one at Sandford Lasher, generate powerful currents that can trap and hold a victim (and often attempted rescuers) underwater at the base of the structure; hence their reputation as "drowning machines".

Henry Fawcett, a student of University College, Oxford, drowned while swimming in May 1833.[2] John Richardson Currer, brother of Charles Savile Roundell and student of Balliol College, Oxford drowned in February 1840 while attempting to row a skiff through the lasher pool.[3] A 16-year-old pupil of the Cowley Diocesan School, Edward John Templar, the son of the Vicar of Great Coxwell, drowned on 21 May 1864 after diving into the water and saving the life of another boy, a non-swimmer who had accidentally fallen into the weirpool.[4] Clarence Sinclair Collier, a 19-year-old student of Balliol College, drowned in June 1879. He and another student were boating above the weir, but the boat overturned and both they and the boat were carried by the current over the weir and into the lasher pool, where Collier drowned.[5] He is commemorated by a memorial on the wall of the antechapel at Baliol College.[6]

At the weir, a 19th-century obelisk records the deaths of five Christ Church students who drowned here - Richard Phillimore and William Gaisford in 1843; George Dasent in 1872 and Michael Llewelyn Davies and Rupert Buxton in 1921.

William Gaisford was the son of Thomas Gaisford, the dean of Christ Church. He got into difficulties while swimming on 23 June 1843. His friend, Richard Phillimore, entered the water to save him, but both young men drowned.[7] Richard Phillimore was the son of Dr Joseph Phillimore, the Regius Professor of Civil Law.[8] They are buried in Christ Church Cathedral and also commemorated by two memorial tablets in the north walk of the Cathedral cloisters.[9]

Michael Llewelyn Davies was the foster son of writer J. M. Barrie, and one of the main inspirations for the character of Peter Pan. He and Rupert Buxton, the son of Sir Thomas Buxton, 4th Baronet, both drowned on 19 May 1921 in the Sandford Lasher[10] in reportedly calm water. Buxton was 21, Llewelyn Davies was just short of his 21st birthday. 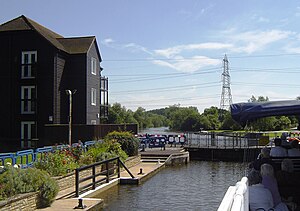 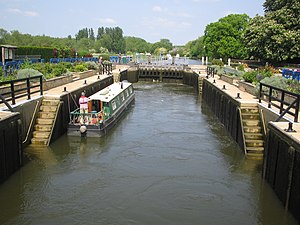 The lock can easily be reached at the end of Church Lane from Sandford on Thames.

After the third island which is Fiddler's Elbow the river makes a sharp turn at Rose Isle. On the west bank is the town of Kennington, Berkshire. Further upstream are Kennington Railway Bridge where the Hinksey Stream joins the Thames again and Isis Bridge carrying the Oxford southern by-pass.

The Thames Path follows the western bank to Iffley Lock crossing the Hinksey Stream on the Kennington Towpath bridge.

Sandford Lasher and its dangers are described in chapter 18 of Jerome K Jerome's Three Men in a Boat (1889).

The pool under Sandford lasher, just behind the lock, is a very good place to drown yourself in. The undercurrent is terribly strong, and if you once get down into it you are all right. An obelisk marks the spot where two men have already been drowned, while bathing there; and the steps of the obelisk are generally used as a diving-board by young men now who wish to see if the place really IS dangerous.

Jerome was a close personal friend of J.M. Barrie, and so probably knew Michael Llewelyn Davies.

It is also mentioned in The Dictionary of the Thames by Charles Dickens, Jr..[11]

In Tom Brown at Oxford, by Thomas Hughes, first published in 1861, the eponymous, principal character has a narrow escape after accidentally rowing a skiff over the weir and into the lasher. Sandford lock is briefly mentioned in The Four Feathers by A.E.W. Mason (1902). It is also briefly mentioned in the poem The Burden of Itys by Oscar Wilde.