Difference between revisions of "Aylesbury Ring" 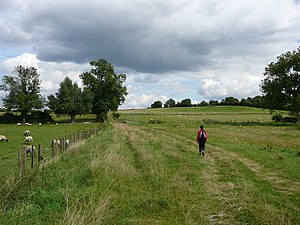 The Aylesbury Ring is a walking route of 32 miles encircling Buckinghamshire's county town, Aylesbury. It was devised by members of the Aylesbury and District Ramblers in the 1980s.

The route is almost wholly within Buckinghamshire, though it briefly trespasses into the Tring Salient of Hertfordshire. It is nowhere far from the town, but passes outside its swollen suburbs, visiting many of the pretty villages which surround Aylesbury, within the Vale of Aylesbury and the edge of the Chilterns.

The route is joined in a few places by other established routes in places: the Buckinghamshire Way and the Midshires Way for much of the western section, the Swan's Way towards Waddesdon, and the Grand Union Canal Walk to the south-east of the town to Wendover.

The Outer Aylesbury Ring is a 53 mile walking route also centred on Aylesbury and also devised by the Aylesbury Ramblers, but further out. It is also trespasses, more boldly, across the Tring Salient but is otherwise a Buckinghamshire route.

The Round Aylesbury Walk

The little brother of the Aylesbury rings, the Round Aylesbury Walk was devised in 2000 as a 12-mile walk closer in to the town, huggng close to its edges.