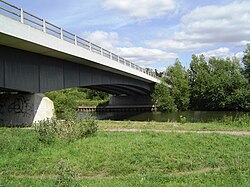 Winterbrook Bridge from the side

Winterbrook Bridge, also known as Wallingford By-pass Bridge, was built in 1993 as part of a by-pass around Wallingford, Berkshire, relieving the single-lane Wallingford Bridge. It forms part of the A4130, connecting Winterbrook, at the north end of Cholsey, just south of Wallingford, on the west bank to Mongewell in Oxfordshire on the east bank. It crosses the Thames on the reach between Cleeve Lock and Benson Lock. The 180-ft three-span bridge is built of steel plate girders with a reinforced concrete deck slab and glass fibre reinforced plastic cladding on the underside.[1]

During the construction, the remains of a late Bronze Age settlement on a former eyot were investigated on the west bank of the Thames.[2] The bridge was designed so as not to disturb the archaeological site. Close to the east bank, near Mongewell, the construction work allowed examination of the South Oxfordshire Grim's Ditch, the long earthwork followed by the Ridgeway Path, and showed it to be late Iron Age/early Roman.