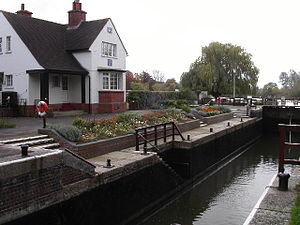 The keeper's house and lock at Benson Lock

Benson Lock is a lock on the River Thames close to Benson, Oxfordshire but on the Berkshire bank of the river. The county border passes through the lock island, but the lock itself is entirely within Berkshire. The first pound lock here was built by the Thames Navigation Commission in 1788 and it was replaced by the present masonry lock in 1870. The distance between Benson Lock and Cleeve Lock downstream is 6½ miles - the longest distance between locks on the River Thames.[1]

The weir runs from the lock island level with the lock across to the Benson side. There is a footbridge over the weir which replaced the ferry which operated here previously. 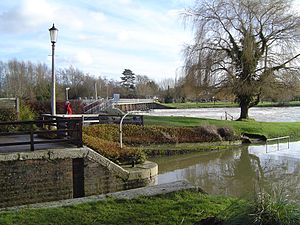 The history of the weir can be traced back into the late 14th century when there was a mill at "Bensington". The mill island and stream are on the Benson side downstream of the lock although the mill itself is long gone. There was also a flash lock, although the first definite reference to this is in 1746. The pound lock was built of oak in 1788 and it is noted that, uniquely for this lock, "Low Country men" were employed at a higher than average wage. Thacker conjectures that these were Dutch specialists. The lock was rebuilt of masonry in 1870. Originally the lock was attended (or not - according to some accounts) by the miller, but there is reference to a (deserted) lock house in 1865.[2] The present lock keeper's house dates from 1913.

The lock is a short distance from the village of Benson and can be reached across the weir. 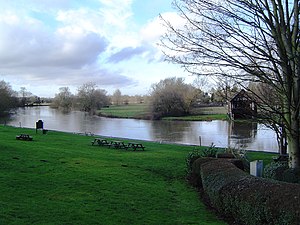 Winter view of the river upstream from Shillingford

About halfway along the reach, the river passes through Shillingford and under Shillingford Bridge, which is built of limestone ashlar masonry with some brick. The central section over the river consists of three segmental arches, and there is a long causeway to the north with nine additional arches. The structure is Grade-II listed.[3] For a great part of the way the two round topped hills of the Wittenham Clumps are in view. After Shillingford the River Thame enters the river from the direction of Dorchester which is a short way to the north. The Thame is navigable by small boats as far as Dorchester Bridge, on the south-east edge of Dorchester.[4]

The Thames Path, which crosses the river at the lock, follows a road in Benson and rejoins the river, running along the northern/eastern bank to Shillingford. At Shillingford the path follows a diversion through the town, rejoining the river outside the town. It continues on the northern bank, over the River Thame to Little Wittenham Bridge where it crosses just before Day's Lock.[4]