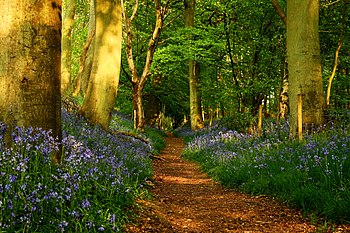 Grim's Ditch with bluebells, near Mongewell in Oxfordshire

Grim's Ditch, Grim's Dyke (also Grimsdyke or Grimes Dike in derivative names) or Grim's Bank is a name shared by a number of prehistoric bank and ditch earthworks in the south of Great Britain. Enigmatic in both their naming and original function, examples are found across the chalk uplands of the southern counties.

The name Grim's Ditch may refer to such works as:

also presumed of the same origin

These earthworks vary in size and perhaps in original purpose. Some are effective military barriers, some have worn down but might once have been formidable, while others might have served simply to demarcate territory.[1] Archaeologists agree that Iron Age peoples built the earthworks around 300 BC.

The name "Grim's Ditch" is Old English in origin. The Anglo-Saxon word dic produced the forms 'dyke' in the north and 'ditch' in the south, which in modern English have become separate words but are identical etymologically. The method of building this type of earthwork involves digging a trench and forming the upcast soil into a bank alongside it: in Modern English we may think of the bank as a dyke and the excavation as a ditch, but originally they were considered all one dic. Several earthworks have alternative forms, named "Ditch" or "Dyke".

The origin of the name Grim is shrouded in mystery, but there are several theories as to its origin. Many ancient earthworks of this type exist across England and Wales, pre-dating the Anglo Saxon settlement of Britain by some 800 years. It was common for the Anglo Saxons to name features of unexplained or mysterious origin Grim. Most scholars believe that the name derives from the Old Norse word Grimr, an Anglo-Saxon alias for the Germanic god of war and magic, Woden, known as Oðin to the Norse, perhaps meaning "the masked one". The name of Woden is thought by some historians to be evident in Wansdyke, the ancient earthwork of uncertain origin which runs from Wiltshire to Somerset. The historian W. H. Stevenson draws a link between Grim as a Saxon alias for Woden, and the name of Grim's Dyke:

Frank Stenton notes that there is no direct evidence that Woden was known among the English as Grim, but (citing supporting claims by Professor Eilert Ekwall) states that it was very probable. He mentions three sites named Grimes Wrosen: one outside Colchester in Essex; another in Warwickshire on the route of the Roman road Watling Street; and Credenhill in Herefordshire. These earthworks, Stenton asserts, were either considered to have been the supernatural work of Woden himself, or sites connected strongly with the cult of Woden where the Anglo-Saxons worshipped the god.[3] Among Woden's many roles is that of a god of war, and it may be that the Anglo-Saxons perceived the earthworks as military in function and therefore ascribed them to him.

Another suggested origin of Grim may be in the Celtic name Grin or Gryn (Gryan in Irish, a putative origin of the name Ryan), a signifier of the Sun as a divinity.[4]

The identities of Woden and the Devil have also become conflated, as evidenced in the number of earthworks named after the Devil. As the Anglo-Saxon population converted to the new religion of Christianity, baptised converts renounced the old Saxon Gods along with the works of the Devil. It is thought that, as a result of this Christianisation, place names and features once associated with pre-Christian deities then came to be associated with the Devil.[4]

Earthworks bearing names related to Grim or the Devil proliferate around Britain: Grim's Ditches exist in Berkshire, Hampshire, Oxfordshire and Hertfordshire, and Devil's Dykes exist in Sussex, Cambridgeshire, Norfolk (near Weeting) and Hertfordshire. The Antonine Wall which once separated Caledonia from Roman Britain is also sometimes known as 'Graham's Dyke'. In Suffolk, a large Neolithic flint mine is known by the name of Grimes Graves.[5]