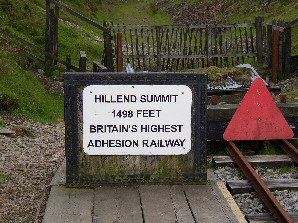 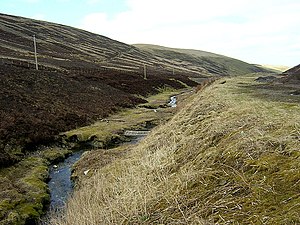 Leadhills is a village in Lanarkshire, six miles south-west of Elvanfoot. It was originally known as Waterhead and was settled for the accommodation of miners.[1]

It is the second highest village in Scotland at an average height of 1,460 ft above sea-level (although the Ordnance Survey are currently remeasuring the height of the village and neighbouring Wanlockhead as it is now thought Leadhills is the lower of the two), near the source of Glengonnar Water, an affluent of the River Clyde.

The Leadhills Miners' Library (also known as the Allan Ramsay Library or the Leadhills Reading Society), founded in 1741 by 21 miners, the local schoolteacher and the local minister, specifically to purchase a collection of books for its members’ mutual improvement[2][3] — its membership was not restricted to the miners; several non-miners, such as William Symington, John Brown (author of Rab and his Friends) and James Braid, were also full members — houses an extensive antiquarian book collection, local relics, mining records and minerals. The library is the oldest subscription library in the British Isles;[4] and is of significant historical and geological importance.

In the late eighteenth century, Peterkin observed the library had “as many valuable books as might be expected to be chosen by promiscuous readers”; he found its members to be “the best informed, and therefore the most reasonable common people that I know” (1799, p. 99); and, in 1823, “J”, observing that “every miner can read, and most of them can write tolerably well”, noted the library had around 1,200 volumes, all of which “have been entirely chosen by [the members] themselves”, and that:

As the miners work only six in the twenty-four hours in the mines, and as the barrenness of the soil affords little scope for agricultural pursuits, they have of course abundance of time for reading: and I believe they generally employ it to good purpose; for many of them can converse upon historical, scientific, and theological points so as to astonish a stranger; and even on political questions, they express their opinions with great acuteness and accuracy.[5]

Today, the library is open from May to September on weekends and bank holidays, between 2 pm and 4 pm.

The grouse moors cover in excess of 11,000 acres around Leadhills and are considered to be amongst the finest in Scotland.

Leadhills Golf Course, instituted in 1891, is the highest in Scotland. The nine hole course offers considerable challenge as the winds can be high and unpredictable as they are channelled between the hills.

The grave of John Taylor is also available to visit in the cemetery. Reputed to be 137 years of age at the time of his death, Taylor's grave (shared with his son, Robert) even attracted the attention of the BBC.[6]

The Leadhills & Wanlockhead Railway runs at weekends only and at Christmas sees the "Santa Express" which includes a ride on the train, a visit to Santa down the lead mine and a story read by "Mrs Kringle" in the Museum of Lead Mining, Wanlockhead. The Elvanfoot railway station was on the Caledonian Railway]main line from Glasgow to the south. A branch from there ran through Leadhills to Wanlockhead and operated until 1939. Part of the route has been reused by the Leadhills & Wanlockhead Railway. The railway is 1,498 ft above sea level.