Wakefield Cathedral, or the Cathedral Church of All Saints is found in Wakefield, in the West Riding of Yorkshire. It was formerly the cathedral of the Diocese of Wakefield, but since 2014 has been one of three co-equal cathedrals for the Diocese of Leeds.

Originally the church was a parish church, which has Anglo Saxon origins. After enlargement and rebuilding, it has the tallest spire in Yorkshire, at 247 feet: the spire is the tallest structure in the City of Wakefield.

The cathedral is designated a Grade I listed building.[1] 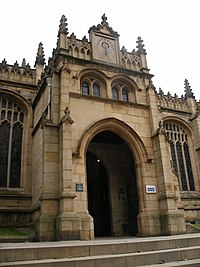 The cathedral stands in the centre of Wakefield, on a hill on Kirkgate. It was built on the site of an Anglo-Saxon church, evidence of which was uncovered in 1900 when extensions to the east end were made.[2] A church in Wakefield is mentioned in the Domesday Book of 1086. In 1090, King William II gave the church and land in Wakefield to Lewes Priory in Sussex and shortly after that a Norman-style church was built.

The Norman church was rebuilt in 1329, and apart from the tower and spire, rebuilt and enlarged in 1469. The church was reconstructed and altered at various times and its spire, damaged in a violent gale, was renewed in 1823.[3] Up to the 16th century the church was known by the Anglo Saxon All Hallows and after the Reformation changed to All Saints.[4]

All Saints Church was largely rebuilt in the Perpendicular Gothic style in the early 15th century and, after years of neglect in the 18th century, owes its current late mediæval appearance to a Victorian restoration by Sir George Gilbert Scott and his son John Oldrid Scott between 1858 and 1874.[5]

In 1888, the Diocese of Wakefield was created and All Saints Church became the cathedral of the diocese. It still serves as a parish church, meaning that until 2000 the head of the chapter of canons was called the provost, rather than the dean.

The Treacy Hall built in memory of Bishop Eric Treacy was completed in 1982.[6]

The cathedral walls are clad in ashlar sandstone. On the south wall is a porch, with a wrought iron gate and a sundial over the door arch. The wall of the north aisle is the oldest part of the church dating from about 1150. The nave piers date from the 12th and 13th centuries and the arcade and chancel arches date from the 14th century. The late 15th-century chancel now serves as the choir. The nave's original stone vaulted roof has been replaced with wood.[1] The 15th-century wooden ceilings over the nave and aisles have carved bosses.[5]

The current chancel, a transept and St Mark's Chapel were built at the east end in 1904 to designs by John Loughborough Pearson and completed by his son, Frank L Pearson. The 20th-century chancel has a stone vaulted roof.

The cathedral's large four-stage west tower has angle buttresses and a very tall crocketed spire behind a crenelated parapet with crocketed corner pinnacles and at 247 feet tall, it is the highest spire in Yorkshire.[7][8]

The cathedral's windows have some panel tracery.[1] None of the mediæval stained glass survives and most of the cathedral's glass was created by Charles Eamer Kempe who created many windows over 50 years.[5] His windows are reminiscent in colour of those of the late Middle Ages, darker on the north wall with Old Testament themes and lighter on the south side where he placed New Testament figures.[9]

The cathedral has a 17th-century rood screen and above it a rood by Ninian Comper completed in 1950.[10] The baptismal font|font dates from the mid 17th-century and the pulpit from 1708.[1] Eleven of the 15th-century choir stalls, the gift of Sir Thomas Savile, have misericords and other carvings including a green man and mythical beasts.[11]

The reredos is the work of John Oldrid Scott and possibly incorporates earlier works while the high altar is by Frank Pearson.[12] Some furniture in St Mark's Chapel is by Robert Thompson, the 'Mouseman'. The cathedral has a fine collection of church plate. A monument to Sir Lyon Pilkington dates from about 1700 and other memorial tablets are from the 18th and early 19th centuries.[1] 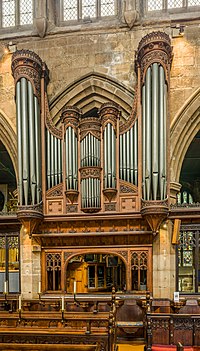 Wakefield Cathedral Choir consists of boys, girls and men who perform at the cathedral. The choir has appeared on BBC One's Songs of Praise and BBC Radio 3's Choral Evensong.[14] In 1992 Wakefield Cathedral became only the second cathedral in Britain to accept female choristers.

The cathedral tower has a ring of 14 bells including a 35-1-0 cwt, (C) tenor, a flat 6th (B♭), and extra treble (A), to give a light 10 inch (F) (tenor 14 cwt). No more than 12 bells are usually rung at any one time. Practices range from rounds and call changes on six up to "Surprise Maximus". The bells are rung on Sundays, and to mark special occasions such as weddings and national events.[15]