This is one of the largest cathedrals in Europe, with the longest nave and greatest overall length of any Gothic cathedral in Europe.[1] Its dedicatation is to the Holy Trinity,[2] St Peter, St Paul, and before the Reformation, St Swithun,[3]

The cathedral is a Grade I listed building.[2] 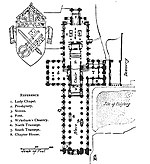 The cathedral was founded in 642 on a site immediately to the north of the present one. This building became known as the Old Minster. It became part of a monastic settlement in 971. Swithun was buried near the Old Minster and then in it, before being moved to the new Norman cathedral. So-called mortuary chests said to contain the remains of Saxon kings such as King Eadwig of England, first buried in the Old Minster, and his Queen Ælfgifu, are in the present cathedral.[4] The Old Minster was demolished in 1093, immediately after the consecration of its successor.[5]

A 1723 engraving of Winchester Cathedral

In 1079, Bishop Walkelin began work on a completely new cathedral.[5] Much of the limestone used to build the structure was brought across from the Isle of Wight from quarries around Binstead. Nearby Quarr Abbey draws its name from these workings, as do many local places such as Stonelands and Stonepitts.

The building was consecrated in 1093. On 8 April of that year, according to the Winchester Annals, "in the presence of almost all the bishops and abbots of England, the monks came with the highest exultation and glory from the old minster to the new one: on the Feast of S. Swithun they went in procession from the new minster to the old one and brought thence S. Swithun's shrine and placed it with honour in the new buildings; and on the following day Bishop Walkelin's men first began to pull down the old minster."[5]

A substantial amount of the fabric of Walkelin's building, including the crypt, transepts and the basic structure of the nave, survives.[6] The original crossing tower, however, collapsed in 1107, an accident blamed by the cathedral's mediæval chroniclers on the fact that the dissolute William Rufus had been buried beneath it in 1100.[5] Its replacement, which survives today, is still in the Norman style, with round-headed windows. It is a squat, square structure, 50 feet wide, but rising only 35 feet above the ridge of the transept roof.[7] The Tower is 150 feet tall.[8]

The west façade at dawn 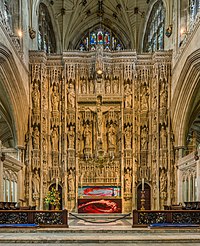 Following the accession of Godfrey de Lucy in 1189 a retrochoir was added in the Early English style. The next major phase of rebuilding was not until the mid-fourteenth century, under bishops Edington and Wykeham.[9] Edingdon (1346–1366),[10] removed the two westernmost bays of the nave, built a new west front and began the remodelling of the nave.[11] Under William of Wykeham (1367–1404) the Romanesque nave was transformed, recased in Caen stone and remodelled in the Perpendicular style,[12] with its internal elevation divided into two, rather than the previous three, storeys.[13] The wooden ceilings were replaced with stone vaults.[12] Wykeham's successor, Henry of Beaufort (1405–1447), carried out fewer alterations, adding only a chantry on the south side of the retrochoir, although work on the nave may have continued through his episcopy.[14] His successor, William of Waynflete (1447–1486), built another chantry in a corresponding position on the north side. Under Bishops Peter Courtenay (1486–1492) and Thomas Langton (1493–1500), there was more work. De Lucy's Lady Chapel was lengthened, and the Norman side aisles of the presbytery replaced. In 1525, Bishop Richard Foxe (1500–1528) added the side screens of the presbytery, which he also gave a wooden vault.[9] With its progressive extensions, the east end is now about 110 feet beyond that of Walkelin's building.[15]

After King Henry VIII declared himself head of the Church of England, the Benedictine foundation, the Priory of Saint Swithun, was dissolved. The priory surrendered to the king in 1539. The next year a new chapter was formed, and the last prior, William Basyng, was appointed dean.[16] The monastic buildings, including the cloister and chapter house were later demolished, mostly during the 1560–1580 bishopric of the Protestant Robert Horne.[17][18]

The Norman choir screen, having fallen into a state of decay, was replaced in 1637–40 by a new one, designed by Inigo Jones. It was in a classical style, with bronze figures by Hubert le Sueur of James I and Charles I in niches. It was removed in 1820, by which time its style was felt inappropriate in an otherwise mediæval building. The central bay, with its archway, is now in the University Museum of Archaeology and Anthropology at Cambridge;[19] it was replaced by a Gothic screen by Edward Garbett, its design based on the west doorway of the nave.[20] This stone structure was itself removed in the 1870s to make way for a wooden one designed by Sir George Gilbert Scott,[21] who modelled it on the canopies of the magnificent choir stalls of the monks (dating from circa 1308).[22] Scott's west-facing screen has been much criticised, although the carving is of superlative workmanship and virtually replicates the earlier, albeit finer, carving of the early 14th century east-facing return stalls on to which it backs. The displaced bronze statues of the Stuart kings were moved to the west end of the Cathedral standing in niches on each side of the central door. Scott's work was otherwise conservative. He moved the lecturn to the north side of the quire beside the pulpit, facing west, where it remained for a century before returning to its present central position, now facing east.

Restoration work was carried out by T.G. Jackson in 1905–12. Waterlogged foundations on the south and east walls were reinforced by diver William Walker, packing the foundations with more than 25,000 bags of concrete, 115,000 concrete blocks, and 900,000 bricks. Walker worked six hours a day from 1906 to 1912 in total darkness at depths up to 20 feet, and is credited with saving the cathedral from total collapse.[23] For this he was awarded the MVO.[24]

Important events which took place at Winchester Cathedral include:

In the south transept is a "Fishermen's Chapel", which is the burial place of Izaak Walton. Walton, who died in 1683, was the author of The Compleat Angler and a friend of John Donne. In the nave sanctuary is the bell from HMS Iron Duke, which was the flagship of Admiral John Jellicoe at the Battle of Jutland in 1916.[25]

The crypt, which frequently floods, houses a statue by Antony Gormley, called "Sound II", installed in 1986, and a modern shrine to Saint Swithun. The mysterious statue contemplates the water held in cupped hands. Gormley spoke of the connection of memories to basic elements of the physical world, "Is it possible to do this and make something fresh, like dew or frost – something that just is, as if its form had always been like this.’ There is also a bust of William Walker, the deep-sea diver who worked underwater in the crypt between 1906 and 1911 underpinning the nave and shoring up the walls.[26]

A series of nine icons were installed between 1992 and 1996 in the retroquire screen which for a short time protected the relics of St Swithun destroyed by Henry VIII in 1538. These icons, influenced by the Russian Orthodox tradition, were created by Sergei Fyodorov and dedicated in 1997. They include the local religious figures St Swithun and St Birinus. Beneath the retroquire Icons, is the Holy Hole once used by pilgrims to crawl beneath and lie close to the healing shrine of St Swithun. 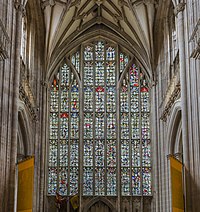 The cathedral's huge mediæval stained glass West Window was deliberately smashed by Cromwell's forces following the outbreak of the Civil War in 1642. After the restoration of the monarchy in 1660, the broken glass was gathered up and assembled randomly, in a manner something like pique assiette mosaic work. There was no attempt to reconstruct the original pictures, condemned as 'susperstitious'. Some surviving fragments are on display at the Abbey Museum of Art and Archaeology in Australia,[27] including examples of the signature blue colour found only in Winchester stained glass.

The Epiphany Chapel has a series of Pre-Raphaelite stained glass windows designed by Sir Edward Coley Burne-Jones and made in William Morris's workshop. The foliage decoration above and below each pictorial panel is unmistakably William Morris and at least one of the figures bears a striking resemblance to Morris's wife Jane, who frequently posed for Dante Gabriel Rossetti and other members of the Pre-Raphaelite Brotherhood.

The Guardian Angels' Chapel had a new cross dedicated during a service of sung Eucharist at 11:00 am on Friday 13 July 2001. The cross, by Justin Knowles sits in a sandstone niche. The cross itself was made from cerulean blue glass 9cerulean meaning heavenly) by the Czech glass artist Jan Frydrych. It sits on a plinth of black granite, with white flecks. It comprises, geometrically, four equal parts, a base, an upright, a cross piece, and a top - the top is somewhat like the cross of St Peter, while the stem is reminiscent of a Latin cross. The arrangement creates an optical illusion that the verticals are considerably longer. The blue echoes the vault portals of the chapel.

The cathedral possesses the only diatonic ring of 14 church bells in the world, with a tenor (heaviest bell) weighing 3,990.4 pounds (1.8 tonnes).[28]

Devotees of Jane Austen frequently visit the cathedral its connection with the author; Austen died in Winchester on 18 July 1817, her funeral was held in the cathedral and she was buried in the north aisle. The inscription on her tombstone makes no mention of her novels, but a later brass tablet describes her as "known to many by her writings".[29]

The novelist Anthony Trollope borrowed features of the cathedral and the city for his Chronicles of Barsetshire; he spent three years in the city as a child.[30] 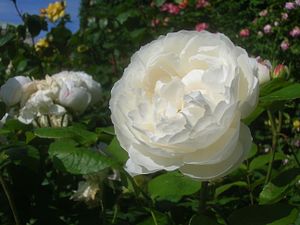 In common with many other Church of England cathedrals, an admission fee has been charged for visitors to enter the cathedral since March 2006. Visitors may request an annual pass for the same price as a single admission.[32]

The Dean and Chapter consist of the Dean, the Vice-Dean (who may also be appointed Canon Chancellor and Pastor), the Receiver General and Canon Treasurer, the Canon Precentor and the Sacrist. 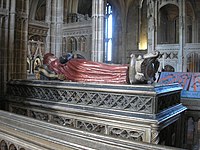 Burials in Winchester abbey include several kings and others in mortuary chests. However the boes were tipped out when the Puritans took over after the Civil War, and the leg bones were used as hurlbats to break the windows of the cathedral. After the destruction, the cathedral authorities gathered the scattered bones up and placed back in the chests though mixed up. These burials include:

One of the mortuary chests also refers to a king 'Edmund', of which nothing else is known. It is possible that this could be Edmund Ironside, King of England (1016) but he is buried at Glastonbury Abbey by most accounts, including the Anglo-Saxon Chronicle.[33]

The current organ, the work of master organ builder Henry Willis, was first displayed in the Great Exhibition of 1851, where it was the largest pipe organ. Winchester Cathedral organist Samuel Sebastian Wesley recommended its purchase to the dean and chapter; it was reduced in size and installed in 1854. It was modified in 1897 and 1905, and completely rebuilt by Harrison & Harrison in 1937 and again in 1986–88.

There is a choir of twenty-two boy choristers, all boarders at the local Pilgrims' School, and twelve lay clerks.

There are also twenty girl choristers who all attend local schools. They sing once a week as well as with the boy choristers as a whole choir for major concerts and services at Easter and Christmas.