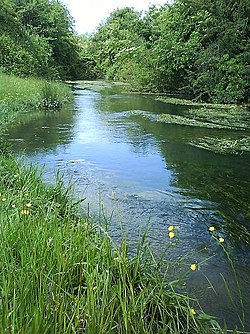 The River Dun (historically known as Bedwyn Brook) is a tributary of the River Kennet flowing through Wiltshire and Berkshire.[1] Its main source is in the parish of Great Bedwyn, Wiltshire and it flows ten miles for its whole course east-north-east into Berkshire, where it discharges into the River Kennet at Hungerford,[2][3] which has a smaller average flow and width upstream of that point.

The Dun valley is an important transport route through the high chalklands between the London Basin to the east and the Vale of Pewsey to the west. It is the route by which the Kennet and Avon Canal (linking London and Bristol) enters the Thames basin from the Vale of Pewsey, crossing the watershed with the aid of the Bruce Tunnel and Crofton Pumping Station. The later Reading to Plymouth railway linking London and the south-west also uses the valley.

This Wiltshire article is a stub: help to improve Wikishire by building it up.
Retrieved from "https://wikishire.co.uk/w/index.php?title=River_Dun_(Kennet)&oldid=64351"
Categories: