Beverston Castle, also known as Beverstone Castle stands in the centre of Beverston village in Gloucestershire, approximately 200 yards north of the A4135 road transecting the village. It is amongst the Cotswold Hills

Much of the castle today is in a state of ruin, but a portion of the structure is occupied, and an expansive handsome garden is part of the estate.

The original castle design was in an approximately pentagonal form; later in the early 14th century, a small quadrangular stronghold was added along with a twin-towered gatehouse. Beverston Castle is two miles west of Tetbury and about a mile east of the mediæval abbey annex, Calcot Manor.

Beverston Castle gatehouse from the inside

Early Roman remains have been found in the near vicinity at Calcot Manor, indicating habitation of this area as early as the 5th century,[2] although it is likely that earlier Iron Age peoples would have also been in this locale.

In the Middle Ages the place was called Beverstane. Another early name for this site was Bureston, derived from the large number of blue stones found here.[3]

In 1140 a battle of the Anarchy was fought here between the armies of King Stephen and Empress Matilda.[4]

Maurice de Gaunt constructed the original castle somewhat before 1229 without a royal licence, but was granted a licence to crenellate. This early castle was fortified by a T-shaped ditch, part of which is still intact in the appearance of a partial moat on the south side of the castle. In the early 14th century, Thomas, Lord Berkeley, the rich (1293–1361), modified Beverston Castle, erecting a small quadrangular stronghold, with a twin-towered gatehouse. A smaller square tower was added in the late 15th century.

In the 16th century, Sir Michael Hicks (son of from London and Julia Arthur) owned Beverston Castle and passed the Beverston holding to his son Sir William Hicks, 1st Baronet of Beverston. The estate remained in the Hicks family through at least the early 19th century. From military outfall of the Civil War (mid-seventeenth century), much of Beverston Castle was destroyed.[5] Roundhead forces attacked the castle twice during the Civil War, but the greatest blow may have been an order from Parliament to dismantle its defensive works. The western and southern ranges along with the gatehouse with one of its original D-shaped towers have survived.

The massive extant west range of Beverston Castle is flanked on its angles with square towers, and it contains a solar above a vaulted undercroft. The pentagon-shaped masonry castle has two surviving, albeit ruined, round towers from the original 13th-century construction of de Gaunt. The dressed bluish limestone appears to be of the same quarry source as nearby Calcot Manor. The two-storey gatehouse, with one extant D-shaped tower, was added by Lord Berkeley in the 1350–1360 era. The gatehouse arch, totally intact as of 2006, would have originally been protected by an immense portcullis. Above the archway was a sizable first floor chamber. The ruined northwest square tower dates to the 14th century (Lord Berkeley's work), further modified in the late 15th century.

The southern domestic range, occupied as of 2006, was built by the Hicks family in the early 17th century, reflecting an age of growing security for large manor houses. This range was originally occupied by a mediæval great hall from either the de Gaunt or Berkeley era. In the year 1691 a fire damaged this southern range, which was restored soon thereafter. 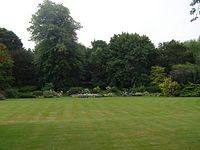 In 2006, Beverston Castle was in private ownership. The ancient moat has been incorporated into the expansive and well-cared-for garden. The gardens are considered a good site for viewing orchids.[6] The southern entrance to the castle is by way of a bridge over the vestigial moat. Vehicle access to the north side of the castle is through the ancient gatehouse arch.