Kingston Railway Bridge in Kingston upon Thames, crosses the River Thames between Surrey and Middlesex, on the reach above Teddington Lock. It carries the looping branch line from London Waterloo to Shepperton and Richmond, linking Kingston and Hampton Wick stations. It was designed by J W Jacomb Hood and constructed in 1907, replacing a cast-iron bridge designed by J E Errington,[1] first discussed in 1860 and completed in 1863.[2] The bridge has five arches, three of which span the Thames; one arch on each side spans over dry land, and that on the Kingston side has a road underneath.

Kingston power stations were located close to the bridge on the Kingston side. The first Kingston power station, Kingston A, was situated in Down Hall Road. It opened in November 1893 and did not close until August 1959. Kingston B was officially opened nearby on 27 October 1948 by King George VI with Queen Elizabeth and ceased generation in autumn 1980. Being close to the Thames, coal came up river by barge, and ash was sent away the same way.[3] The barge dock was constructed at Kingston Railway Bridge close to the present the upstream entrance to Canbury Gardens. A landscaping scheme has been developed to open up this section of riverside that has been closed to the public.[4] 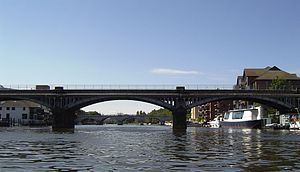 The railway bridge, with Kingston Bridge behind it, from downstream
Retrieved from "https://wikishire.co.uk/w/index.php?title=Kingston_Railway_Bridge&oldid=48984"
Categories: