Talbot Green is a town in Glamorgan, located at the mouth of the short and mountainous Ely Valley, between Llantrisant forest and Llantrisant. The River Ely runs through along the town boundary before continuing to Pontyclun. The town is bordered by the hill town of Llantrisant to the east, the village of Pontyclun to the South and Llanharan a few miles to the west.

The A4119 road links the town to junction 34 of the M4 motorway in the south and to the Glamorgan valleys to the north. The Talbot Green by-pass opened in 1991 to relieve traffic in the town through disabling access to or from Pontyclun via Cowbridge Road, and provided a shorter route for the A473 Bridgend to Pontypridd Road. In September 2010, a £90m by-pass linking Talbot Green to Pontypridd was opened.[2] The by-pass is notable for its three dormouse bridges, built to protect the endangered animals.[2] 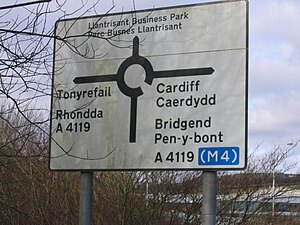 A railway runs north from Pontyclun railway station, turning west at Talbot Green to run roughly parallel to the River Clun, alongside the north of the A473, and originally ran to the Cwm Coking Works at Tynant, Beddau. All the original railway infrastructure remains intact between Talbot Green and Pontyclun, including the track, signals and bridges. The track is still embedded in the road where it crosses the A473, the warning lights remain at the roadside and the roadsigns warn drivers to stop if they see warning lights flash at the level crossing. A recent consultative study (Sewta Rail Strategy Study—January 2006) has considered the possibility of reopening the Pontyclun to Beddau branch line, as a passenger line rather than just for freight. This would require new stations at Talbot Green, Llantrisant, Gwaun Meisgyn and Beddau (Tynant).[3]

Glamorgan Vale retail park was opened circa 1996 and an extra unit was built in 2004 around the same time as the expansion of Talbot Green shopping park. It is located on the A473 Talbot Green bypass. It has the total of 11 shopping units and 1 fast food/drive thru restaurant.

Talbot Green shopping park was opened circa 1996 initially with three units, then later to 14 shopping units and a fast food restaurant and two coffee shops. Some units are located alongside the A4119 Dual Carriageway.

There is also a Tesco Extra store.

The town also has a golf club, and industrial estates including Coedcae Lane and Lanelay Industrial Estate.

The Department Store Leekes is also situated in Talbot Green at Cowbridge Road, near Pontyclun.

The town also has a development of Offices, Hotel, Pub and a private Health facility which is located in Magden Park on the Ely Meadows alongside the A4119 Talbot Green to Ynysmeardy dual carriageway near the Royal Glamorgan Hospital. It also has the Avionics department of British Airways and is also the headquarters of the Welsh Blood Service.

Talbot Green's most significant building is Lanelay Hall, until recently the headquarters of the South Wales Fire and Rescue Service, who moved just over two miles away to the Forest View Business Park, Llantrisant, in February 2009.[4]

Improvements to the road network, in particular the A4119 linking the Rhondda Valleys to the M4, through Tonyrefail and Talbot Green, brought development pressure to the area around Llantrisant. Extensive housing development has taken place recently in the towns along the A473, the main Pontypridd to Bridgend road—linking Llantwit Fardre to Llantrisant, Talbot Green, Llanharan and Pencoed—the road that runs parallel to the Afon Clun from Rhiwsaeson to Pontyclun.

On June 2011, it was announced there are proposals to make Talbot Green a "new town centre" by building a new supermarket, 40 shops, a multi-screen cinema, cafes, restaurants, bars and a hotel.[5] There will also be offices for local businesses, a range of civic and community facilities, apartments and houses. They are to be located on the former sites of Staedtler and Purolite and the surrounding brownfield land.The new scheme will include a new Leekes store to replace the existing one on the same site. The scheme is expected to create up to 1,900 jobs in the area.[6]