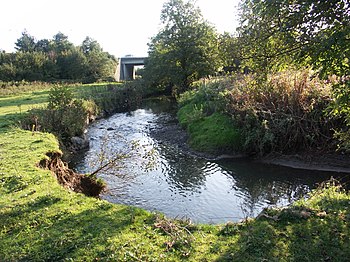 The Clun near Talbot Green

The River Clun flows 14 miles through Glamorgan, entering the River Ely close to its own mouth on the Bristol Channel. Rising on the western slope of The Garth, the river is fast-flowing, in clear shallow water with a hard substrate, flowing to the south of Llantrisant and generally west to the River Ely at Pontyclun.

The river contains species such as stone loach, lamprey, eel, roach, chub and bullhead. The Clun valley is home to many species, including dragonflies and damselflies, badgers, and the marsh fritillary butterfly, as well as bats, dormice, otters and great crested newts.

The valley is at risk of flooding between Cross Inn and Pontyclun and is liable to overflow its northern bank along its one and a half mile length downstream from the main Tonypandy to Cardiff Bay road at Talbot Green to Pontyclun, providing a wetland wildlife habitat.

There are many archeological sites close to the course of the river, from the Bronze Age tumuli on The Garth and an Iron Age hill fort at Rhiwsaeson, to the more recent industrial archeology of the coal mines. 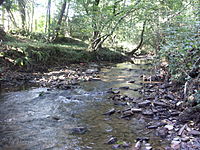 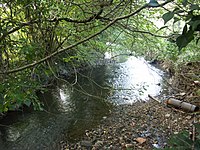 The Clun has its source on the western slope of The Garth at 1,007 feet above sea level midway between Cardiff and Pontypridd.

Near the water treatment plant at Rhiwsaeson, the Clun is fed from the north by Nant Myddlyn, which itself is joined from the east by Nant Dowlais. Nant Myddlyn rises in Tynant, Beddau about one and a half miles to the north of its confluence with the River Clun, between Beddau and Llantwit Fardre.

Leaving Rhiwsaeson, about a mile east of Cross Inn, the Clun widens to between about eight and 12 feet and slows. The river flows to the south of the A473 Pontypridd to Bridgend road, where it is fed from the south by Nant Mwyndy. Below this the River Clun flows beneath the A4119 onto meadows. To the south, the enclosed woodland of Coed-yr-Hendy follows the river's course for its final half mile.

Past Pontyclun the Clun joins the River Ely.

The Clun marks the southern edge of the South Wales Coalfield and there are several former collieries to the north of the river. Many pits were begun in the 1860s in Beddau, Ty'n-y-nant and Gelynog pits being the most important. Cwm Colliery was sunk by the Great Western Colliery Company Limited in 1909, which brought a rapid expansion of the population of the valley. In 1923 the Powell Duffryn Steam Coal Company sank the Ynysmaerdy Colliery at Llantrisant, also known as the New Duffryn and Llantrisant Colliery. In 1931 an underground railway linked the Cwm to the Maritime Colliery, Pontypridd and by 1934 the Cwm employed 100 men on the surface and 780 men underground.

A methane gas explosion on bank holiday Monday, 2 June 1941, killed four men and destroyed most of the surface buildings - the explosion would have caused far greater loss of life had it not occurred on a bank holiday. The colliery never reopened after the accident.