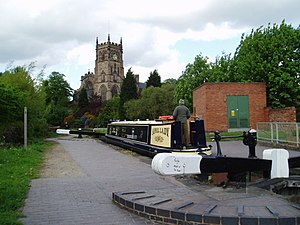 Kidderminster Lock on the S&W Canal

The ring is 74 miles and includes 105 locks including three electrically operated river locks, two pairs of staircase locks and two broad locks. The route includes flights of locks at Tardebigge (x30), Stourbridge (x16) and the Black Delph at Brierley Hill (x8). The route also includes two of the longest navigable tunnels on the UK network, these being the Netherton and Wast Hills Tunnels.

The ring has an alternative longer route via Wolverhampton of 83 miles and 122 locks and does not include the Stourbridge or Dudley canals. This route uses the connection between the Staffordshire and Worcestershire Canal, and the BCN Main Line at Aldersley Junction.

The ring is popular for cruising and has a number of narrowboat hire centres on the route including Alvechurch, Viking Afloat (Worcester), Anglo-Welsh (Tardebigge), Brook Line (Dunhampstead) and Black Prince (Stoke Prior).

During spring freshet the Severn can be closed to navigation, making the ring not fully navigable. There is also potential for some sections of the ring being temporarily unnavigable consequent to lack of water during a drought.