From Wikishire
(Redirected from Braintree, Essex)
Jump to: navigation, search

Braintree is a town in Essex, a place of about 42,000 people. It is found 10 miles northeast of Chelmsford and 15 miles west of Colchester on the River Blackwater, A120 road and a branch of the Great Eastern Main Line.

Braintree has grown contiguous with several surrounding settlements: Braintree proper lies to the south of Stane Street, and Bocking lies to the north. The two together can be referred to as Braintree and Bocking, although many people refer to them together as "Braintree".

The town is in north Essex, about 40 miles from London, with factories and housing to the south and arable farmland to the north. Two rivers flow through Braintree in this direction: Pod's Brook approaches the western side of the town, forming a natural boundary between Braintree and the neighbouring village of Rayne about two miles to the west. Pod's Brook becomes the River Brain as it passes under the Roman road, before running through the southern part of Braintree. The River Pant or Blackwater runs roughly parallel to it, through the north of Bocking and away to the east of the town. The Brain eventually flows into the Blackwater several miles away, near Witham.

The origin of the name Braintree is obscure. The Domesday Book calls it Branchetreu. Mediæval Latin legal records record the town as Branktre.[1]

It is generally accepted that the name means "Branoc's tree", after an otherwise unknown chieftain, which in Old English would be Branocestreow.

Another theory is that the name is derived from that of Rayne, which was actually a more important settlement in Norman times. Another suggestion is that the name means "town by the river" or "Braint River".

The River Brain is a possible origin of the name, unless the river is named from the town. "Braint" is well attested as a river name in Britain; there is one of that name in Anglesey, and it may be conjectured that it was the name of the Blackwater in pre-Saxon times. Other suggest the Old Welsh "Bran" used rivers, meaning "crow" which may refer to the dark appearance of such a river, making it a good fit for a river now called "Blackwater"). 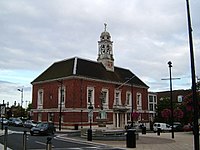 Braintree dates back over 4,000 years when it was just a small village. The Romans built two roads; a settlement developed at the junction of these two roads but was later abandoned when the Romans left Britain.[2]

The manor of Branchetreu is recorded in the Domesday Book of 1085; it consisted of 30 acres and was held by Richard, son of Count Gilbert.[3]

In the Middle Ages pilgrims used the town as a stopping place, and its size increased. The Bishop of London obtained a market charter for the town in 1190.[2] The pilgrim trade stopped at the Reformation, but the town prospered from the 17th century when Flemish immigrants made the town famous for its wool cloth trade.[2] In 1665, the Great Plague killed 865 of the population of just 2,300 people.[2]

The wool trade died out in the early 19th century and Braintree became a centre for silk manufacturing when George Courtauld opened a silk mill in the town.[2] By the mid 19th century, Braintree was a thriving agricultural and textile town, and benefited from a railway connection to London.[2] The wealthy Courtauld family had a strong influence on the town, supporting plans for many of the town's public buildings such as the town hall and public gardens established in 1888.[2] 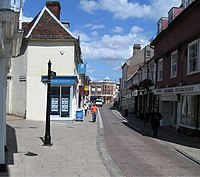 Freeport is a shopping area on the outskirts of Braintree, described as a "designer outlet village". It has approximately 90 departments where designer brands sell surplus stock for lower than the recommended retail price.

Braintree has a museum on the history of the town, named after John Ray. There is a cinema on the outskirts of the town. Opposite the cinema, there is also a bowling alley and various restaurants, together with numerous public houses and bars in the town centre.

The Bocking Arts Theatre based at The Literary and Mechanical Institute at 15 Bocking End Braintree CM7 9AE promotes pantomimes, drama and a range of live entertainment events. It is also used extensively for local Community activities including regular NHS Blood Donor Sessions, Record and Stamp/Coin Collectors Fairs, and Charity Fundraising Events. The management of the building is now reliant on unpaid volunteers under the auspices of the Bocking Arts Theatre Charitable Trust. Built in 1863 this Grade II listed building was bequeathed to the citizens of Braintree by George Courtald and his family and will celebrate its 150-year anniversary in 2013.

The Braintree and Bocking Carnival takes place each June. The event starts with a procession of floats through the town centre, finishing at Meadowside. Events, including a fair and sideshows, continue throughout the afternoon at Meadowside until around 10pm.

Braintree Musical Society perform two shows a year (in April and October). For 61 years these were performed at The Institute at Bocking End, but in 2012 they moved to the Braintree Arts Theatre.

Bocking and Braintree in books 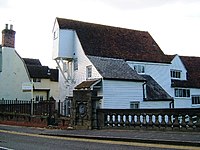 H G Wells, in his What Is Coming? A European Forecast (1916), in the fourth chapter, "Braintree, Bocking, and the Future of the World," uses the differences between Bocking and Braintree, divided, he says, by a single road, to explain the difficulties he expects in establishing World Peace through a World State.

Efficiency, perhaps the supreme virtue for Wells and his friends in the Fabian Society, meant someone in authority preventing waste and inefficiency at every level from water mains to wars. The difficulty of establishing it at the local level was a reflection of the difficulty of establishing it at the global level. In that same chapter he mentions his friend but ideological foe, G K Chesterton, who would have been delighted by those same local differences (particularly if it included the beer in the pubs) and whose 1904 novel, The Napoleon of Notting Hill, praises them. Wells wanted to end war by establishing an authority that could ban any difference between people that might lead to disagreements and perhaps war. Chesterton wanted to reduce the likelihood of war by reminding people that a healthy love for your country meant respecting the love others have for their country. In the December 31, 1910 issue of Illustrated London News he wrote: