The Guild Church of St Dunstan-in-the-West is in Fleet Street in the City of London. It is dedicated to Dunstan, Bishop of London and Archbishop of Canterbury. The church is of mediæval origin, although the present building, with an octagonal nave, was constructed in the 1830s to the designs of John Shaw.

The church is designated a Grade I listed building.[1]

First founded between AD 988 and 1070, there is a possibility that a church on this site was one of the Lundenwic strand settlement churches, like St Martin in the Fields, the first St Mary le Strand, St Clement Danes and St Bride's, which may pre-date any within the walls of the city. It is not known exactly when the original church was built, but it was possibly erected by Dunstan himself, or priests who knew him well. It was first mentioned in written records in 1185.[2]

King Henry III gained possession of the church and its endowments from Westminster Abbey by 1237 and then granted these and the advowson to the Domus Conversorum ('House of the Converts' i.e. of converted Jews), which led to neglect of its parochial responsibilities.

William Tyndale, the celebrated translator of the Bible, was a lecturer at the church and sermons were given by the poet John Donne. Samuel Pepys mentions the church in his diary.[3] The church narrowly escaped the Great Fire of London in 1666. The Dean of Westminster roused 40 scholars from Westminster School in the middle of the night, who formed a fire brigade which extinguished the flames with buckets of water to only three doors away.

The mediæval church underwent many alterations before its demolition in the early 19th century. Small shops were built against its walls, St Dunstan's Churchyard becoming a centre for bookselling and publishing.[4] Later repairs were carried out in an Italianate style: rusticated stonework was used, and some of the Gothic windows were replaced with round headed ones, resulting in what George Godwin called "a most heterogeneous appearance".[4] In 1701 the church's old vaulted roof was replaced with a flat ceiling, ornamented with recessed panels.[4]

The Worshipful Company of Cordwainers has been associated with the church since the 15th century. The company holds an annual service of commemoration to honour two of its benefactors, John Fisher and Richard Minge, after which children were traditionally given a penny for each time they ran around the church. 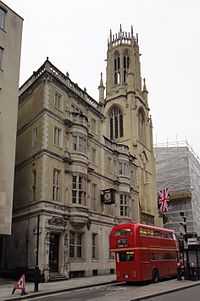 In the early 19th century the mediæval church of St Dunstan was removed to allow the widening of Fleet Street and a new church was built on its burial ground. An Act of Parliament was obtained authorising the demolition of the church in July 1829 and trustees were appointed to carry it into effect.[5] In December 1829 and September 1830 there were auctions of some of the materials of the old church. The first stone of the new building, to the design of John Shaw, Sr. (1776–1832), was laid in July 1831 and construction proceeded rapidly. In August 1832 the last part of the old church, which had been left as a screen between Fleet Street and the new work, was removed.[4]

Shaw dealt with the restricted site by designing a church with an octagonal central space. Seven of the eight sides open into arched recesses, the northern one containing the altar. The eighth side opens into a short corridor, leading beneath the organ to the lowest stage of the tower, which serves as an entrance porch. Above the recesses Shaw designed a clerestory, and above that a groined ceiling. The tower is square in plan, with an octagonal lantern, resembling those of St Botolph's Church in Boston, and St Helen's, in York. George Godwin suggested that the form of the lantern might have been immediately inspired by that of St George's church in Ramsgate (where Shaw was architect to the docks), built in 1825 to the designs of H. E. Kendall.[4] John Shaw Sr. died in 1833, before the church was completed, leaving it in the hands of his son John Shaw Jr. (1803–1870). 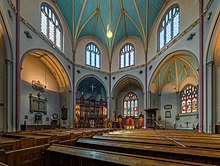 The communion rail is a survivor of the old church, having been carved by Grinling Gibbons during the period when John Donne served as vicar (1624–1631). Some of the monuments from the mediæval building were reinstituted in the new church and a fragment of the old churchyard remains between Clifford's Inn and Bream's Buildings.[6]

Apart from losing its stained glass, the church survived the London Blitz largely intact, though bombs did damage the open-work lantern tower.[7] The church was damaged again on the 24/25 March 1944, during Operation Steinbock, a late war and lower intensity attack on London.[8] The building was largely restored in 1950. An appeal to raise money to install a new ring of bells in the tower, replacing those removed in 1969, was successfully completed in 2012 with the dedication and hanging of 10 new bells.[9] 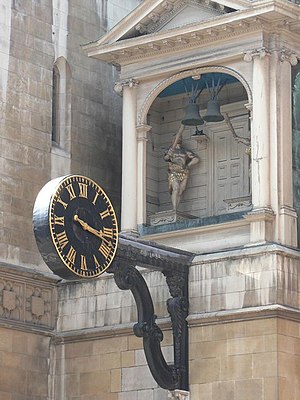 On the façade is a chiming clock, with figures of giants, perhaps representing Gog and Magog, who strike the bells with their clubs. It was installed on the previous church in 1671, perhaps commissioned to celebrate its escape from destruction by the Great Fire of 1666. It was the first public clock in London to have a minute hand. The figures of the two giants strike the hours and quarters, and turn their heads.

There are numerous literary references to the clock, including in Thomas Hughes' Tom Brown's Schooldays, Oliver Goldsmith’s The Vicar of Wakefield, both David Copperfield (novel)|David Copperfield and Barnaby Rudge by Charles Dickens, The Warden by Anthony Trollope, the penny dreadful serial The String of Pearls (in which the character Sweeney Todd first appears), David Lyddal's The Prompter (1810)[10] and a poem by William Cowper.

In 1828, when the mediæval church was demolished, the clock was removed by art collector Francis Seymour-Conway, 3rd Marquess of Hertford to his mansion in Regent's Park which became known as St Dunstan's. During the First World War, a hostel for blinded soldiers was lent the house, and the new charity took the name St Dunstan's.[11]

Above the entrance to the old parochial school is a statue of Queen Elizabeth I, taken from the old Ludgate, which was demolished in 1760. This statue, by William Kerwin and dating from 1586, is contemporaneous with its subject. In the porch below are three statues of ancient Britons also from the gate, probably meant to represent King Lud and his two sons.

Adjacent to Queen Elizabeth is a memorial to Lord Northcliffe, the newspaper proprietor, co-founder of the Daily Mail and the Daily Mirror. Unveiled in 1930, the obelisk was designed by Edwin Lutyens and the bronze bust is by Kathleen Scott. Next to Lord Northcliffe is a memorial tablet to James Louis Garvin, another pioneering British journalist.

Close to the font is bronze memorial plaque for Thomas Mudge (1715/16-1794), inventor of the lever escapement and watchmaker to George III. The tablet was made and engraved by noted sundial maker, hand-engraver and sculptor Joanna Midgal. It was commissioned by the Worshipful Company of Clockmakers, and installed in March 2019.

Behind the iconostasis to the left side of the church, high on a wall, there is a marble memorial tablet to the highly-regarded seventeenth century clockmaker Henry Jones (1634-1695) who worked in the Inner Temple, and his wife Hannah, who continued their business after his death. Jones was an apprentice of Edward East.

St Dunstan-in-the-West is one of the churches in England to share its building with the Romanian Orthodox community. The chapel to the left of the main altar is closed off by an iconostasis, formerly from Antim Monastery in Bucharest, dedicated in 1966.[12]

The church has often been associated with the legend of Sweeney Todd, the 'demon-barber' of Fleet Street. This is most likely due to it being mentioned in the original penny dreadful The String of Pearls as the church bearing a crypt into which Sweeney Todd's victims were unceremoniously dumped into after they had been murdered and turned into meat pies.

St Dunstan-in-the-West appeared as the "journalist's church" in the 2018 TV series Press.[13]