St Bride's Church stands on Fleet Street in the City of London, Middlesex. The building's most recent incarnation was designed by Sir Christopher Wren in 1672 after the Great Fire of 1666, though Wren's original building was largely gutted by fire during the London Blitz in 1940.

Due to its location in Fleet Street, St Bride's has a long association with journalists and newspapers. The church is a distinctive sight on London's skyline and is clearly visible from a number of locations. Standing 226 feet high, it is the second tallest of all Wren's churches, with only St Paul's itself having a higher pinnacle.

The church is designated a Grade I listed building.[1] 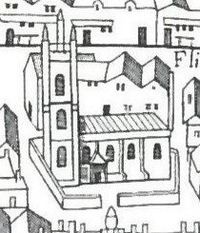 St. Bride's may be one of the most ancient churches in London, with worship perhaps dating back to the conversion of the Middle Saxons in the 7th century. It has been conjectured that, as the patron saint is Bridget of Ireland, it may have been founded by Celtic monks working as missionaries to the English.[2]

The present St Bride's is at least the seventh church to have stood on the site. Traditionally, it was founded by St Bridget in the sixth century.[3] Whether or not she founded it personally, the remnants of the first church appear to have significant similarities to a church of the same date in Kildare in Ireland. The Norman church, built in the 11th century, was of both religious and secular significance; in 1210, King John held a parliament there. It was replaced by a larger church in the 15th century. The diarist Samuel Pepys was christened here in 1633[4]

St Bride's association with the newspaper business began in 1500, when Wynkyn de Worde set up a printing press next door. Until 1695, London was the only city in England where printing was permitted by law.[5]

In the late 1580s, one Eleanor White, daughter to artist and explorer John White, was married in St Bride's, to the tiler and bricklayer Ananias Dare. Their daughter Virginia Dare was to be the first English child born in North America. She was born on Roanoke Island on 18 August 1587: "Elenora, daughter to the governour and wife to Ananias Dare, one of the assistants, was delivered of a daughter in Roanoke".[6] The child was healthy and "was christened there the Sunday following, and because this childe was the first Christian borne in Virginia, she was named Virginia".[6] A modern bust of Virginia Dare stands near the font (one of the few survivals from the original church)[7] replacing an earlier monument which was stolen and has not been recovered. 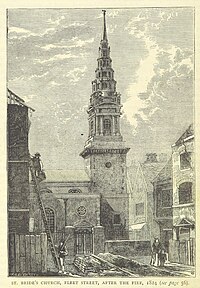 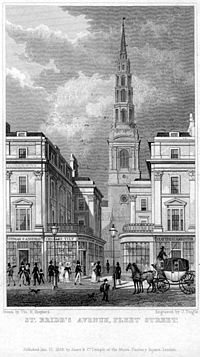 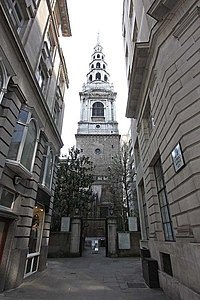 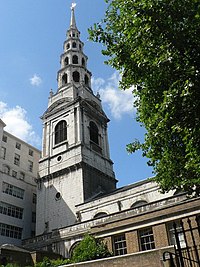 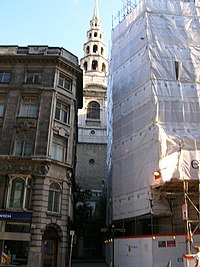 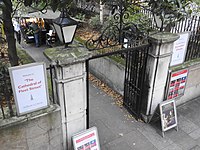 In the mid-17th century disaster struck. In 1665, the Great Plague of London killed 238 parishioners in a single week,[8] and in 1666, the following year, the church was completely destroyed during the Great Fire of London, which burned much of the city.[9]

After the fire, the old church was replaced by an entirely new building designed by Sir Christopher Wren, one of his largest and most expensive works, taking seven years to build.[10] St Bride's was reopened on 19 December 1675. The famous spire was added later, in 1701–1703.[11] It originally measured 234 ft, but lost its upper eight feet to a lightning strike in 1764; this was then bought by the then owner of Park Place, Berkshire, where it still resides. The design utilises four octagonal stages of diminishing height, capped with an obelisk which terminates in a ball and vane.

Buried at St Bride's is Robert Levet (Levett), a Yorkshireman who became a Parisian waiter, then a "practicer of physick" who ministered to the denizens of London's seedier neighbourhoods. Having been duped into a bad marriage, the hapless Levet was taken in by the author Samuel Johnson who wrote his poem "On the Death of Mr. Robert Levet", eulogising his good friend and tenant of many years.[12] Also buried at St Bride's are the organist and composer, Thomas Weelkes (d. 1623) and the poet, Richard Lovelace (d.1658), as well as author Samuel Richardson (d. 1761)

Legend has it that the multi-tiered wedding cake has its origin here. It is said to date back to 1703 when Thomas Rich, a baker’s apprentice from Ludgate Hill, fell in love with the daughter of his employer and asked her to marry him. He wanted to make an extravagant cake, and he drew on the design of St Bride's Church for inspiration.

On the night of 29 December 1940, during the Blitz of central London in the Second World War, the church was gutted by fire-bombs dropped by the Luftwaffe. That night 1,500 fires were started, including three major conflagrations, leading to a fire storm, an event dubbed the Second Great Fire of London, due to the enormous amount of damage caused. St Paul's Cathedral itself was only saved by the dedication of the London firemen who kept the fire away from the cathedral and the volunteer firewatchers of the St Paul's Watch who fought to keep the flames from firebombs on the roof from spreading. After the war, St Bride's was rebuilt at the expense of newspaper proprietors and journalists.

One fortunate and unintended consequence of the bombing was the excavation of the church's original 6th century Saxon foundations. Today, the crypt known as the Museum of Fleet Street is open to the public and contains a number of ancient relics, including Roman coins and mediæval stained glass.[13] Post-war excavations also uncovered nearly 230 lead coffins with plaques dating from the 17th, 18th and early 19th centuries, filled with the bones of parishioners; causes of death for most of them were found by the Museum of London.[14] 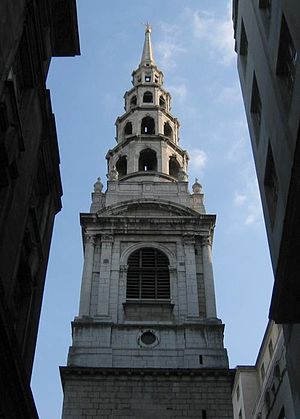 Exterior of St Bride's Church from Fleet Street with spire

In September 2007 the former rector, Archdeacon the Venerable David Meara, announced a special appeal to raise 3.5 million GBP to preserve the church's unique heritage[15] and on November 2007 Queen Elizabeth II was guest of honour at a service to celebrate the fiftieth anniversary of the restoration work necessary after the Second World War.[16]

In March 2012 The Inspire! appeal was launched to raise the at least £2.5 million needed to repair the crumbling stonework of the church's famous spire.[14]

The choir in its present form (12 adult singers – 4 sopranos, 2 altos, 3 tenors and 3 basses) was established in time for the re-dedication service in 1957, and has remained more or less in this format ever since. The choir sings at two services each Sunday throughout the year (reducing to 8 singers during August) and also for numerous special services.

The organ was built by the John Compton Organ Company, and arguably their finest work, the organ was ready for the rededication of the church in November 1957. It has recently been completely overhauled and cleaned by Keith Bance, who has carried out some modest tonal updating. This included remodelling the positive division, adding new mixture stops to the great and pedal divisions and the provision of a new Vox Humana for the solo division. These changes have further increased the resources of an already versatile instrument. The organ has four manuals, 98 speaking stops, close to 4,000 pipes, a multi-level capture system and the wind is provided by four blowing installations.

St Bride's has had a number of notable parishioners, including John Milton, John Dryden, and the diarist Samuel Pepys, who was baptized in the church.[17] Pepys buried his brother Tom in the church in 1664, but by this stage the vaults were so overcrowded that Pepys had to bribe the gravedigger to "justle together" the corpses in order to make room.[5]