Canna in Argyllshire is the westernmost of the Small Isles of the Inner Hebrides. It is linked to the neighbouring island of Sanday by a road and sandbanks at low tide and this forms a large natural harbour between the islands.

Canna is 5 miles long and a mile wide. The isolated skerries of Hyskeir and Humla lie six miles south-west of the island.[1]

The island's name is of uncertain origin; possibly the Norse Kne-oy ("knee-shaped island"), or the Gaelic for "wolf whelp island" or "porpoise island".

The islands were left to the National Trust for Scotland by their previous owner, the Gaelic folklorist and scholar John Lorne Campbell in 1981, and are run as a farm and conservation area. Canna House, one of two big houses on the island (the other being Tighard), contains John Campbell's important archives of Gaelic materials that were donated with the islands to the nation.[1] Since then the Trust has engaged in new initiatives to attract new residents and visitors to the island.

Life on the island

There are some 20 buildings on Canna and Sanday, including three churches, one of which has been deconsecrated. There is also a post office which was converted from a garden shed. The Canna tea room, which closed in 2008, reopened in 2010 as the Gille Brighde Café and Restaurant.[2] A new resident manager for the island was also appointed in the same year.[3] The island is isolated and the inhabitants must buy their provisions from the mainland, but it has a telephone link, a red telephone box and broadband internet access, although there is no mobile phone coverage. Electricity is provided by a diesel generator, at mainland voltage and frequency, and there is a private water supply.[4][5] In 2010 a proposal to establish a fish farm off Canna was defeated in a residents' ballot, even though it would have created a number of new jobs.[6]

The island has no appreciable crime. A mainland-based policeman visits the island twice a year, mainly to inspect gun licences. A doctor based on the neighbouring island of Eigg is available for house calls once a month. The roads on Canna are not metalled and are privately owned, local vehicles therefore do not require road tax. The previous footbridge to Sanday was destroyed by storms during 2005, and has recently been replaced by a road bridge. This allows vehicular access at all tide levels for the first time, although the road on Sanday is still covered by high tides.[4][5]

Canna is renowned for its birdlife, including sea eagles, golden eagles and puffins. Recently, Perigrine Falcons and Merlins have been sighted also. The island is also inhabited by a number of rare butterfly species. In the nearby waters one can spot dolphins and smaller whales. Canna is noted for its tiers of basalt pillars that rise over the eastern half of the island and the sea cliffs that dominate its northern shore. The highest point on the island is Càrn a' Ghaill (Gaelic for rocky hill of the storm) at at 689 feet. On the eastern edge of the island, Compass Hill (456 feet) is formed of a volcanic rock known as tuff of such a high iron content that nearby ships' compasses are distorted, pointing east, rather than north.[1] 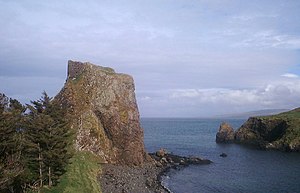 Ruins of An Coroghon "castle"

An Coroghon is a possible ancient fortress site on an isolated stack at the east end of the island. A mediæval prison tower was built on the site which was described by Thomas Pennant in 1772 as "a lofty slender rock, that juts into the sea: on one side is a little tower, at a vast height above us, accessible by a narrow and horrible path: it seems so small as scarce to be able to contain half a dozen people. Tradition says, that it was built by some jealous regulus, to confine a handsome wife in".[7] There are the remains of a lintelled entrance in a mortared wall.[1][8]

Canna is known to have belonged to the monastery of Iona in 1203 and it is likely that it did so from a much earlier period, possibly the 7th century.[9] The island has been suggested as the Columban monastic retreat of Hinba, but in Adomnán's chronicler of the life of Columba he notes that Brendan the Navigator set sail from Ireland to visit Columba and unexpectedly found him en route at Hinba, suggesting that Hinba lies south of Iona.[10] Two carved stone crosses stand on the island, one of which is tenth century of a unique design and which may have a significant Viking influence and ten cross marked slabs.[9] Sgorr nam Ban-naomha on the south coast has the remains of an early Christian cashel. The site has the remains of an enclosing wall and could only have been conveniently supplied by sea. The Gaelic name translates as "grassy slope of the holy women" and in the 19th century local people believed that it had a healing spring and that nuns had lived there at one time.[11] Three carved stones, bearing crosses, were found in the enclosure in 1994.[12] In 2012 the National Trust for Scotland announced that the first cursing stone to be found in the Scotland, dated to circa 800, had been discovered on Canna.[13] 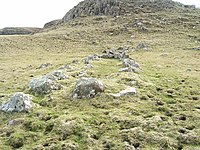 Written records of the Norse period from the ninth to the thirteenth centuries are few, but Norse place-names are found on Canna, including such elements as sgor, gearaid (enclosure), tota (homestead) and Sanday ("sand island"). The name of Canna itself may pre-date the Norse period.[14][15]

There is a burial site from this period known as Uaigh Righ Lochlainn ("the grave of the King of Norway") at Rubha Langan-innis on the north coast. This is a narrow rectangular structure approximately 40 ft long by 6 ft wide on a grassy promontory below the cliffs.[1][16][17]

References to Canna are absent from documents relating to Clan Macruari holdings in the Small Isles in the 13th and 14th centuries, suggesting the island was still under ecclesiastical control. In 1428 the Abbot of Iona wrote to the Pope requesting immunity for the island's inhabitants on pain of excommunication for those who violated this status, claiming that:

"by reason of wars and other calamities in the past divers homicides, depredations and other ills were perpetrated so that some strong men of the familiars of the Abbot and convent were slain by pirates and sea rovers and divers farmers and inhabitants of the island were afraid to reside there".[18]

Monro reported of "Kannay" in 1549 that the island was a: "faire maine land, foure myle lange, inhabit and manurit, with paroche kirke in it, guid for corne, fishing and grassing, with a falcon nest in it, pertines to the Abbot of Colmkill",[19] although it "burned with fire" as part of the feud between Clanranald and Maclean of Duart in the late 16th century.[20]

The lands belonging to Iona were transferred into private ownership during the Reformation[21] and Macdonald of Clanranald sold the island after the failure of the kelp boom to Donald MacNeil in 1827.[1]

In the aftermath of the Jacobite Rising of 1745 a Royal Navy vessel arrived on 3 April 1746. The crew demanded 20 cows, which were duly provided by the islanders. However, the ship was becalmed for four days and the sailors complained of the smell of the cattle they had slaughtered and demanded 20 more. The "Bailie" of the island complained that this was unjust.

Upon which the officer.... gathers all the cattle of the island.... shot 60 of the best dead, threw the old beef overboard and would not allow the poor distressed owners to finger a gobbet of it, no, not a single tripe.[22]

On the 18th April "King George's men" went "hunting the Canna women" who had to hide from them in isolated caves and under cliffs. One pregnant woman died after being chased by 12 of them.[22]

A' Chill, to the north-west of Canna Harbour, was the main settlement until 1851 when the island was cleared. It was then under the ownership of Donald MacNeil's son Donald, who was a minor at the time. The post-clearance population is recorded as 57 in 1881 (with a further 62 on Sanday), in which year MacNeil sold to Robert Thom, a ship owner from Glasgow. His more enlightened stewardship continued until 1938 when his family sought a sympathetic purchaser and sold to John Lorne Campbell. Campbell lived there until his death in 1996, gifting the island to the NTS in 1981.[1] His widow, the American musician Margaret Fay Shaw, remained at Canna House until her death in 2004 at the age of 101.[23]

In September 2005, it was reported that the population of Brown Rats on the island had grown to 10,000 and was causing such problems to both the human population and the birdlife, particularly the rare Manx shearwaters, that a complete cull would take place. However, the population of woodmice, Apodemus sylvaticus on the island is a distinct race descended from a Norse lineage, and as the rat cull used rodenticide, a breeding population of mice was removed beforehand by the Royal Zoological Society of Scotland (RZSS) to safeguard the population's future. By the end of 2006 it was believed that Canna was rat-free. The mice had been returned to Canna and appeared to be thriving. During the summer of 2006 there was also an encouraging increase in the number of breeding puffins and razorbills, and Manx shearwaters were nesting for the first time since 1997.[24]

Call for families for Canna 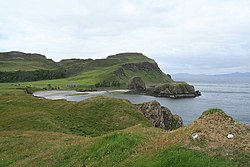 In October 2006 the NTS[25][26] decided to invite two families to rent properties on the island, in an effort to attract new skills and spirit to the island community. The invitation was mainly aimed at people with "skills in building, plumbing and gardening". The call was global[27][28] and over 400 responses were received, from places as varied as Germany, Sweden, India and Dubai. From these, Sheila Gunn and John Clare were chosen to move to Canna during summer 2007.[29] They were joined in early 2008 by two more incomers, Neil and Deborah Baker, from Llannon in Carmarthenshire. Neil is a gardener, and his job was to restore the fine but overgrown gardens of Canna House.[30] Since then, a further cottage has been restored and is expected to be occupied by newcomers in 2011. However, in June 2011 it was announced that twelve people were planning to leave the island: Clare and Gunn, the Bakers and their two children, and schoolteacher Eilidh Soe-Paing, her husband and four children. The school will close, temporarily at least, as there will no longer be any school age children on the island.[31]

St Edward's chapel was converted into a hostel and study centre for the Gaelic language and culture in 2001 at a cost of £800,000. Formally opened by The Princess Royal and handed over to the Hebridean Trust, it has since lain empty and has been subjected to considerable vandalism in the interim.[32]

A single local stamp was issued for Canna in 1958 by the then laird, John Lorne Campbell. The stamp shows Compass Hill and two Manx Shearwaters, a seabird found in profusion on the island. Shearwaters is also the name of the currency of the stamp. Its use is optional and all proceeds from the sale - at the island farm and post office - go to the Shipwrecked Mariners Society. The stamps serve the many visitors to the island who wish to have their mail posted there.[33]

View from Compass Hill on Canna, overlooking Canna Bay and Sanday towards Rum