Kyle of Lochalsh is a quiet village on the coast of mainland Ross-shire, in the very southwest of that county, 63 miles west of Inverness. It nestles on sheltered waters beneath heather- and gorse-clad hills from the slopes of which are fine views across the sound and over Skye.

The village stands at the entrance to Loch Alsh, opposite the village of Kyleakin on the Isle of Skye, to which island it is now the main gate, since the Skye Bridge crosses the water here, about a mile from the village, replacing the ferry which used to sail to Skye from Kyle of Lochalsh. The bridge was opened in 1995.

The village is the transport and shopping centre for the area as well as having a harbour, marina with pontoons for maritime visitors. The surrounding scenery and wildlife are regarded as attractions of the village, as is the slow pace of life. Crofting as well as more recent crofting pursuits like salmon farming are some of the activities taking place in Kyle of Lochalsh. 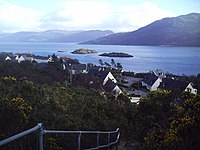 A land-based control centre of the Royal Naval BUTEC submarine range is based in Kyle of Lochalsh.[1]