From Wikishire
(Redirected from Sca Fell)
Jump to: navigation, search

Scafell or Sca Fell (archaically also named Scaw Fell is a mountain in Cumberland. Its height of 3,162 feet makes it the highest mountain in the county and in all England after neighbouring Scafell Pike, from which it is separated by the col of Mickledore. It stands in the Southern Fells of the Lake District.

Originally the name Sca Fell referred to the whole of the massif from Great End south to Slight Side; only more recently has the general term become applied solely to the part of the fell south of Mickledore.

It was once believed that Scafell was the highest mountain in this part of the Lake District — it is much more prominent in views from many directions than its higher neighbour — with the three apparently inferior peaks to the north (those now known as Scafell Pike, Ill Crag and Broad Crag) being known collectively as the "Pikes of Sca Fell".[1]

Sca Fell stands between Wasdale in the west and upper Eskdale to the east. The highest part of the fell is a ridge running south from Mickledore as far as Slight Side, which is counted as a separate fell by most guidebooks.[1][2] Despite regarding Slight Side as a separate entity, Wainwright included the wide upland area beyond it to the south west as a part of Sca Fell. More modern guides have partitioned the plateau off as a further independent top, Great How.[2]

The opposing flanks of Sca Fell are entirely different in character. Smooth slopes, lacking vegetation at higher levels but also devoid of any real interest, run down toward the head of Wast Water. On the east and north all is rock, walls of crag looming impressively over Eskdale.

From the narrow ridge of Mickledore the northern face of Sca Fell rises precipitously, an unusually complete barrier to progress along a Lakeland ridge. At the top of the rise is Symonds Knott (3,146 feet), the northern top. The wall of crags — Scafell Crag to the west and the East Buttress above the Eskdale side of Mickledore — has two main weaknesses. Running laterally across Scafell Crag is Lord's Rake, a scree filled chute with several intermediate cols. It has two upper entrances onto the saddle separating Symonds Knott from the main summit. Formerly passable as a scramble, it suffered from a serious rock fall in 2002 — with subsequent further falls — and recent guidebooks do not consider it a viable route, although it is gradually becoming more stable.[2][3] The second breach in the crags is Broad Stand, a series of sloping steps which drop down from Symonds Knott almost to Mickledore; however, these steepen immediately above Mickledore and cannot be negotiated safely except by rock-climbers.[1][2] The main summit stands a little to the south of the saddle, all around being a sea of stones. An easy ridge then steps down southward over Long Green to Slight Side. On the east are Cam Spout Crag and the fine high waterfall after which it is named.

Beyond Slight Side is a rough upland with many craggy tops and a number of tarns, before the southward descent finally ends in Lower Eskdale. South West of Sca Fell, below the scarp of Great How, is Burnmoor Tarn, one of the largest in Lakeland. Around 40 feet deep it holds trout, perch and pike. The tarn is prevented from following what would appear the natural line of drainage into Miterdale by moraines, and empties southward, reaching the Esk at Beckfoot. Near the southern shore stands Burnmoor Lodge, once a keeper's cottage and a dwelling two miles from the nearest road.[4]

The main summit bears a large cairn on a short rocky ridge. Northward is a saddle, marked by a large cross of stones and then the bouldery climb to Symonds Knott, the north top. This gives views straight down to Mickledore.

Scafell gives a very different view to that from its higher neighbour with Wastwater and the coastal plain given great prominence. There is a fine vista of the Western Fells, together with Bowfell and the Coniston Fells.[1]

While now known to lack some of its neighbour's elevation, Sca Fell is still the more difficult peak to climb, especially from the precipitous northern and eastern sides. The traverse of the ridge between Scafell Pike and Sca Fell is especially difficult because steep cliffs prevent a direct walking route, entailing a considerable loss of height to get round the obstacle. The direct route up the crags, known as Broad Stand, is a dangerous and exposed scramble that has caused many accidents and injuries; it is usually treated as a rock climb, with appropriate protection. 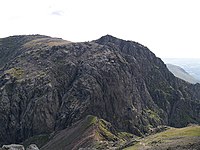 The classic ascent by way of Lord's Rake path from Wastwater is now threatened by unstable rocks following a rock fall in 2001. A pleasant but lengthy alternative begins from Boot in Eskdale, following the River Esk upstream, and scrambling up to the summit by way of Foxes Tarn. A gentler return can be made across moorland, by way of the Burnmoor Tarn. Also starting in Eskdale, the Terrace route can be followed from Wha House, first ascending Slight Side.

Scafell Crag, the massive north buttress of Sca Fell, is one of England's largest cliffs and has many famous rock climbs.