Ill Crag is a fell in Cumberland. By some counts it is the fourth-highest peak in England, though the great Alfred Wainwright deemed it no more than a subsidiary summit of Scafell Pike, albeit a fine one. It reaches a height of 3,068 feet.

Ill Crag overlooks Eskdale and has splendid views across to Bowfell and Crinkle Crags. It forms part of the Scafell chain, and lies about less than a mile east of Scafell Pike. Broad Crag lies immediately to the west, between Ill Crag and the Pike. 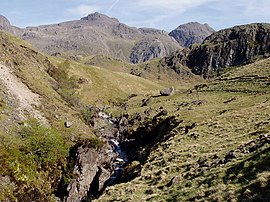 Ill Crag is one of very few fells in the Lake District not to be given a separate chapter in Alfred Wainwright's celebrated guide books, though Wainwright does give it a page in the Scafell Pike chapter. It therefore does not qualify for the accolade of being a "Wainwright", though its height, exceeding 3,000 feet, qualifies it as a Furth Munro.