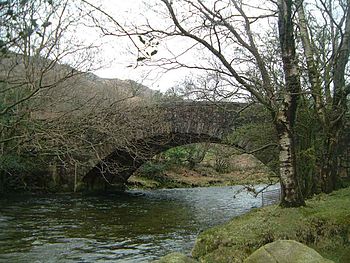 The Esk flows at Wha House Bridge in Upper Eskdale

The River Esk is a river of Cumberland which rises in the highest fells of the county and flows to the sea at Ravenglass.

The Cumberland Esk one of several rivers of that name, and one of two Esks touching the county, the other being the Dumfriesshire Esk, which at its lowest reach marks the county boundary.

The Esk rises in the Sca Fell range at a height of 1,630 feet, just below Esk Hause, the mountain pass between the fells of Great End and Esk Pike. The infant burn then flows southerly through wild and picturesque countryside making the leap over several waterfalls before being joined by its first major tributary, Lingcove Beck, at Lingcove Bridge.

Within a few miles below Lingcove Bridge, the Esk passes Brotherilkeld Farm (which formerly belonged to the monks of Furness Abbey); at this point it is joined by Hardknott Beck and the river now flows westerly through the farmland of Eskdale and is accompanied by the motor road which goes down the valley. The river continues past the small villages of Boot and Eskdale Green before joining the Irish Sea at Ravenglass.

There are several British rivers named "Esk". In his book "The Origins Of English Place Names" (page 77) P.H. Reaney says that the rivers name is derived from the British word "Isca" meaning "water", and this also applies to the similarly spelled rivers Axe, Exe and Usk with changes to the name evolving over ten centuries of usage.[1]

The Esk has a reputation as a very good fishing river, it offers fine angling for sea trout and salmon being made famous by the writer and broadcaster Hugh Falkus who lived in the Esk valley and used the river as a basis for many of his books and films.[2]