Broad Crag is a Cumberland fell which forms part of the Scafell chain in the Southern Fells of the Lake District. It rises to 3,064 feet, making it the fifth-highest peak in England.

Broad Crag stands about 500 yards north-east of Scafell Pike itself. Ill Crag lies south-east, and Great End at the end of the Scafell chain is about a mile away.

Broad Crag is one of very few fells in the Lake District not to be given a separate chapter in Alfred Wainwright's celebrated guide books and therefore been left off that august category of fells known as "Wainwrights". Wainwright considered Broad Crag to be a subsidiary top of Scafell Pike. However, by its height, rising above 3,000 feet, Broad Crag is classed as a "Furth Munro".

Whatever classifications men may write it into, Broad Crag's grandeur and height are compelling. 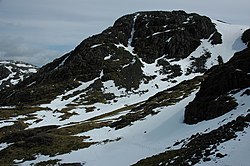 Broad Crag may be climbed on the way up to Scafell Pike, by way of a path from Esk Hause or from the route from Crinkle Crags and Bowfell.