Great Wilne is a small village in southernmost Derbyshire, on the border with Leicestershire, marked here by the River Trent, and seven miles south-east of the county town, Derby. It is here that the River Derwent, flowing from the north, enters the Trent.

The Derwent splits Great Wilne from its church, St Chad's, which is a small hamlet named Church Wilne. Church Wilne can only be approached by a short walk across the footbridge over the Derwent, or by a very roundabout car journey which crossing into Leicestershire and back.

The Trent and Mersey Canal also passes through Great Wilne, beginning its course at the meeting of the rivers.

An early record of the village is found in a royal charter of 1009, signed in the Witan, by which King Ethelred 'the Unready' recognised the position and boundaries of Weston-on-Trent (Westune). The land described in that charter included the lands now known as Shardlow, Great Wilne, Church Wilne, Crich, Smalley, Morley, Weston and Aston-on-Trent. By this charter, the King gave his minister a number of rights that made him free from tax and to his own rule within the manor.[1]

Wilne appears in the Domesday Book of 1086.

Shardlow and Great Wilne were included in the parish of Aston-on-Trent until 1838, when Shardlow constructed its own church. 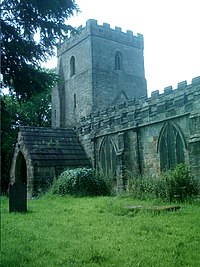 There is archaeological evidence of a deserted mediæval settlement at Church Wilne.[2] St Chad's Water, which was purchased by the local council, is a nature reserve and a site for water sports.[3]