Dunham Massey is a stately home within its own parkland in Cheshire. This was the home of the last Earl of Stamford but has been owned by the National Trust since 1976. Its name is that of the mediaeval manor where the house stands (and gives a name to a modern civil parish).

The area around Dunham Massey has a long history, as reflected in its 45 listed buildings. It was a locally important area during the medieval period, and acted as the seat for the Massey barony. The Georgian hall, with the remains of a castle in its grounds, is a popular tourist attraction. There are two Sites of Special Scientific Interest hereabouts: Dunham Park and Brookheys Covert.

The name Dunham is derived from the Anglo-Saxon dun, meaning hill. The Massey element of the name is a result of its ownership by the Massey family.

The Roman road between Deva Victrix (Chester) and Eboracum (York) passes between the Dunham Massey and Bowdon. The manor of Dunham is recorded in the Domesday Book of 1086 as having belonged to the thegn Aelfward before the Norman Conquest and to Hamo de Masci afterward. De Masci also had control over the manors of Baguley, Bowdon, Hale, Partington, and Timperley.

Dunham was the seat of the Masseys. The importance of Dunham is further emphasised by the presence of two of de Massey’s castles: Dunham Castle and Watch Hill Castle on the border with Bowdon; a third, Ullerwood Castle, was near Hale. The Masseys remained lords of Dunham and its environs until the 14th century, when the line became extinct.[1][2]

The Booth family inherited most of the Massey lands in 1409, with Dunham Massey remaining at the heart of the estate. By the Elizabeth period, Dunham Massey Castle had been demolished. Probably during the Middle Ages, Dunham Massey Hall became the home of the manorial lord, and a centre of power in the area. The hall was rebuilt in 1616, leaving no remains of the old medieval hall. The mill at Dunham was first documented in 1353, although the mill's present structure dates to the 1860s. It lies on the River Bollin, opposite Little Bollington. The first record of Dunham's deer park was also in 1353. The settlement of Dunham Woodhouse dates from the 15th century. During the medieval period, the primary source of employment in Dunham Massey was agriculture, mainly arable.

The present hall was initially built in 1616 by Sir George Booth, who was amongst the creations of baronets by King James I in 1611, but was later remodelled by John Norris for George, Earl of Stamford and Warrington between 1732 and 1740; it was also altered by John Hope towards the end of the 18th century and by Joseph Compton Hall between 1905 and 1908. The hall itself, the stables, and the carriage house of Dunham Massey are all Grade I listed buildings. 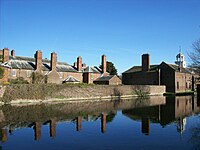 The site is moated and lies immediately west of the village of Dunham, with the deer park lying to the south.

The hall was used as a military hospital during the First World War. It was donated to the National Trust by the last Earl of Stamford, in 1976. The hall and grounds are open to the public and are a popular tourist attraction, with nearly 200,000 visitors in 2010.

Inside is a collection of Huguenot silver, the carving The Crucifixion by 17th-century wood carver Grinling Gibbons, and a white marble bust of the Emperor Hadrian; the head is antique, but the neck and shoulders are 18th-century; it was probably acquired by the 5th Earl of Stamford. The collection of paintings in the hall include Allegory with Venus, Mars, Cupid and Time by Guercino; The Cascade at Terni by Louis Ducros; and portraits by William Beechey, Francis Cotes, Michael Dahl, A R Mengs, Sir Joshua Reynolds, George Romney, Enoch Seeman, and Zoffany. The George Harry Grey, 7th Earl of Stamford and 3rd Earl of Warrington removed a selection of paintings to Enville Hall in the late 1850s, and it was not until the time of Roger Grey, 10th Earl of Stamford that some were returned after sales in 1929 and 1931.[3] The deer park at Dunham Massey is the only medieval park in Trafford to survive to the present.[2] 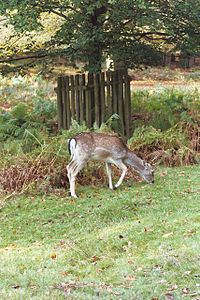 Dunham Park covers an area of 192.7 acres and is part of the Dunham Park Estate, run by the National Trust. The park is mostly “pasture-woodland or park-woodland” and has been since the Middle Ages. Many of the oak trees, which make up the larger part of the woodland, date back to the 17th century. Dunham Park is the only place in the northwest of England with such a concentration of old trees, and one of only a few remaining in England, making it a site of national importance. The park supports a range of animals, including fallow deer and over 500 species of insect.