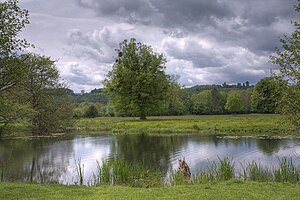 Magna Carta Island is an island in the River Thames belonging to Buckinghamshire. It is situated on the reach above Bell Weir Lock across the river from the water-meadows at Runnymede.

The island is one of several contenders for being the place where, in 1215, King John sealed the Magna Carta.[1] Whilst the charter itself indicates Runnymede by name, it is possible the island may have been considered part of Runnymede at the time.

It is known that in 1217 the island was the meeting-place of Henry III and Louis (later Louis VIII) of France.[1]

In August 2014, it was reported that the island would be put up for sale by Sotheby's International Realty.[2]