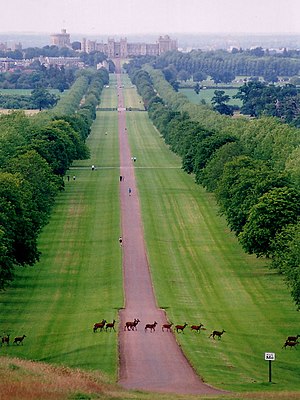 Windsor Great Park is the Queen's parkland at Windsor Castle; a vast deer park of 5000 acres. It spreads across eastern Berkshire and into Surrey, south of the town of Windsor.

The park was, for many centuries, the private hunting ground of Windsor Castle and dates primarily from the mid-13th century. Now largely open to the public, the parkland is a popular recreation area for residents of the nearby suburbs. It is owned and managed by the Crown Estate. 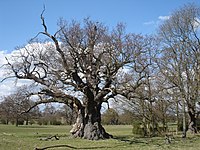 One of many ancient oak trees

The Great Park is a gently undulating area of varied landscape. It has sweeping deer lawns, small woods, coverts and areas covered by huge solitary ancient oak trees. There is a small river in the north of the park called the Battle Bourne running to the Thames near Datchet. The Chertsey Bourne runs through a number of ponds to the south. Chief amongst these are Great Meadow Pond and Obelisk Pond, near the great lake of Virginia Water.

The most prominent hill is Snow Hill and the famous avenue of trees known as the Long Walk runs between here and Windsor Castle.

The park is accessed by a number of gates: Queen Anne's Gate, Ranger's Gate, Forest Gate, Sandpit Gate, Prince Consort's gate, Blacknest Gate, Bishop's Gate and Bear's Rails Gate and the original mediæval park pale can still be seen in places. The main Sheet Street Road (A332) into Windsor runs through the north-east of the park.

On the western side of the park is The Village, built in the 1930s to house Royal estate workers. It has a popular village shop. Other buildings include the Royal Lodge, Cumberland Lodge, the Cranbourne Tower and Norfolk Farm.

Areas associated with or attached to the Great Park, but not officially within its borders include the Home Park, Mote Park, Flemish Farm, Cranbourne Chase, Forest Lodge and South Forest. 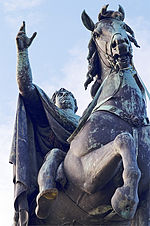 The modern enclosed Deer Park is at the northern end of the Great Park. It is home to a large herd of semi-wild deer, reflecting the original mediæval purpose of the park.

The Long Walk runs south from Windsor Castle to the 1829 Copper Horse statue of King George III]] atop Snow Hill where there are impressive views of the castle. It is 2.65 miles from George IV Gateway at Windsor Castle to the Copper Horse.[1] Other equestrian statues in the park include one of the Albert, Prince Consort, to the west of the Polo grounds, and one of The Queen near the Village.

The Royal Lodge was built in the centre of the park as the Deputy Ranger's house. It was made in to a retreat for the Prince Regent from 1812, but was largely pulled down after his death. The remains were renovated, in the 1930s, as a home for the then Prince Albert (later King George VI), and his queen. It is now the official residence of the Duke of York and not accessible by the public.

Other notable buildings in the park include Cumberland Lodge, built in 1652 during the Commonwealth period. After the restoration of the monarchy in 1660 the Lodge quickly became the home of the Ranger of the Great Park, an office in the gift of the sovereign. Each Ranger made his – or in one case, that of Sarah Churchill, Duchess of Marlborough – her own mark on the features of the house and its surroundings.

Throughout her life Queen Victoria was a frequent visitor. Her daughter Princess Helena of the United Kingdom lived at the Lodge for over fifty years, presiding over elaborate re-building after a bad fire in 1869 and extensive alterations in 1912. Lord FitzAlan, last Lord Lieutenant of Ireland, was the last private person to be entrusted with the Lodge. It was in his time, in 1936, that the Prime Minister, Stanley Baldwin, discussed the crisis over King Edward VIII's desire to marry Wallis Simpson, talks which led to his Abdication of the Crown a few weeks later. In 1947, the King made the Lodge available to the newly established St. Catharine’s Foundation, later known as the King George VI and Queen Elizabeth Foundation of St. Catharine’s. Today the organisation is simply known as Cumberland Lodge. Cumberland Lodge today is an educational charity dedicated to initiating fresh debate on the burning questions facing society. The grounds are not generally open to the public, but the house is continually holding conferences, open days and lectures.[2]

The private Cranbourne Tower is easily viewed from surrounding paths. It is all that survives of Cranbourne Lodge, the residence of the Keeper of Cranbourne Chase. It is thought to date back to the 16th century. 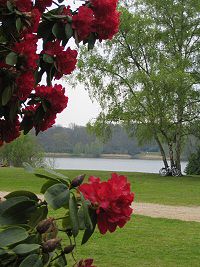 In the south-east of the park, near Englefield Green, are the popular Savill Gardens and Valley Gardens which were designed and built by Eric Savill in the 1930s and 40s. They include an extraordinary range of flowers and trees from around the world. Smith's Lawn and Polo Grounds are also nearby.

Virginia Water Lake, in the south of the park, is an artificially created lake dating from the 1740s. Among the lakeside features are the 100-foot high Canadian totem pole commemorating the centenary of British Columbia and a collection of ornamental Roman ruins, transported from the site of Leptis Magna (near modern-day Tripoli) in 1816 and installed at Virginia Water in 1826.

Beside a smaller lake, known as the Obelisk Pond is the Obelisk memorial to the Duke of Cumberland. It was originally inscribed “Culloden” but this was erased on Queen Victoria's orders and replaced with "CUMBERLAND".[3] 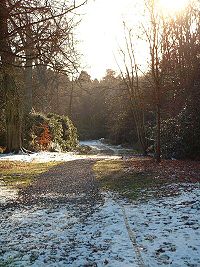 The Great Park in Winter

Windsor Castle was begun in the 11th century by William the Conqueror as it afforded a good defensive point over the River Thames. A vast area of Windsor Forest to the south of the castle became reserved by the King for personal hunting and also to supply the castle with wood, deer, boar and fish. It was not until later that it became necessary to formally define this area. In 1129, the first parker was appointed, and in 1240, King Henry III officially set out the borders of the Park, a region many times larger than the current Great Park. The castle was a mere fortress at this time and, when hunting, King Henry would have been resident at the more comfortable manor house of Old Windsor (what later became known as Manor Lodge). The title "Parker" exists today as "Ranger of the Park", the current title-holder being Prince Philip. Kings Edward I and Edward III used the park for jousts and tournaments and the latter had his Royal stud there to supply horses for the Hundred Years' War. The moat at Bear's Rails contained the manor house of Wychamere, the home of William of Wykeham while he was building the castle. It was later used for bear-baiting.

Except for a brief period under Oliver Cromwell, the area has always remained the personal property of the monarch, though today the Park is owned and administered by the Crown Estate, a public body established by Act of Parliament.

By the 18th century, the food value of the park land to Windsor had decreased in importance and the new Hanoverian monarchs preferred to build and garden the land rather than hunt in it. The Long Walk had been laid out by King Charles II and the planting of its trees completed by William III (William of Orange) in the 1680s, with double rows of elms which lasted until Second World War, but the Georges extended it and built numerous features and monuments, such as the Copper Horse (depicting George III) and the Obelisk (in honour of William, Duke of Cumberland). George III had a set of 2,000 year old Roman ruins imported from Africa and placed in the park.

Virginia Water was begun in 1746 by William, Duke of Cumberland who was then Ranger of the Park. Few details are recorded of the building of the lake; however it has been suggested that prisoners of war from the recent Jacobite risings, who were incamped at the nearby Breakheart hill, were involved. The original lake was much smaller than the current form, and was destroyed in a flood in 1768. In 1780, Paul and Thomas Sandby began construction of a much larger lake at the site, and went on to add an artificial waterfall, Meadow Pond and Obelisk Pond. The lake replaced a small stream of the same name which was probably named after Queen Elizabeth I, who was known as the "Virgin Queen".

Queen Victoria was probably the greatest patron of the Park. Following the death of her beloved Albert, she largely withdrew from public life, retreating in part to the Park. At adjoining Frogmore she built a Royal Mausoleum for Albert. She was later buried there upon her own death, along with a number of other subsequent Royals.

During the 19th and early 20th century, one of the main events for farmers near and far was the Christmas sale of stock from the Royal Windsor Estates. Held on the same week as the Smithfield Show, buyers came from all over the country to buy something from the monarch. The sale in 1850 was held on December 17 by Messrs Buckland & Sons of Windsor, and included Superior Fat Heifers for £20 each; 10 fat ewes, fed by HRH Prince Albert for 33/10; Fine Old Wether Sheep fed by His Grace the Duke of Buccleuch for 40/6. The sale made a total of £226.

During the World Wars, the Smith's Lawn area of the Park was used for housing troops. During the 1940s, much of the deer park was ploughed and farmed for food, which involved the felling of hundreds of ancient trees. Over 200 large bombs fell on the land, including several V-2 rockets. During the 1948 Summer Olympics, the park was used as the road cycling venue.[4] In the 1950s, the Park was gradually turned into the recreation area open to the public that it is today. This involved the re-planting of Savill Gardens (which had been allowed to run wild during the war) and the new Valley Gardens. In 1951, a large wall for creeping plants was built at Savill using bricks from bombed-out London buildings. In 1958, a Totem pole was installed nearby, a gift from British Columbia to the Queen.

In 1972 Ubi Dwyer organised the "People's Free Festival", the first of the Windsor Free Festivals in the Park, attended by some 700 people. A co-organiser Sid Rawle claimed that Windsor Great Park has been common land until the 18th century, when it had been enclosed by George III as a hunting park. The Duke of Edinburgh was reported to be "furious". Ubi & co repeated the festival in 1973 with at least 1,400 in attendance. In 1973 the Windsor Great Park regulations were introduced. In 1974, 7,000 people turned up but it was violently broken up by police, who made 220 arrests and the festival was banned. Dwyer was jailed the next year for distributing leaflets to promote another festival and Rawle was given 3 months for reproducing parts of Ubi's leaflets in the underground newspaper International Times.[5]

A new visitor centre designed by Glenn Howells Architects and Buro Happold was opened in June 2006, and was nominated for the 2007 Stirling Prize.