Masham (mæsəm) is a small market town in the North Riding of Yorkshire, sitting in Wensleydale, on the western bank of the River Ure. The name 'Masham' is from the Old English "Mæssan ham"; "Mæssa's homestead" after an otherwise unrecorded founder.

The nearest railway stations are Thirsk and Northallerton. 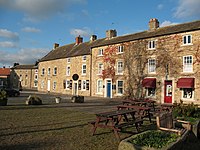 The market place is by far the largest in the district. It is tightly bordered on its south and west sides by ranges of two- and three-storey buildings. To the southeast stands St Mary's Church, with its large churchyard.

Of note for a relatively small town is that it is home to two working breweries, Black Sheep Brewery and Theakstons, situated only a few hundred yards from one another.

Masham received its first market charter in 1250. Wednesday and Saturday are market days, popular among both locals and visitors. Masham's importance as a major sheep market is the reason for the huge market place and its beautiful Georgian houses. The market originally thrived because of its nearness to Jervaulx and Fountains Abbeys, with the monks' large flocks of sheep. The annual Sheep Fair is in September. 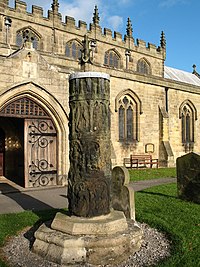 St Mary's Church was most likely founded in the seventh century and stood somewhere near the present town hall on what used to be known as Cockpit Hill. The graveyard yielded 36 burials in a recent excavation. The present church, while having some Anglo-Saxon stonework and the stump of an eighth-century prayer cross, is mainly Norman with fifteenth-century additions.

Masham was given to York Minster in the mediæval period but, as the archbishop did not wish to make the long journey north to oversee the town's affairs, the parish was designated a peculiar.

The Romans had a presence here, though Masham itself wa apparently an Anglo-Saxon foundation. Around 900 AD the Vikings invaded the region, burning and laying waste to the church and causing great suffering in Masham. They also introduced sheep farming, something for which the town is well known today.

The area of the ancient parish, except Burton-on-Yore, was known as Mashamshire from the 12th century or earlier.[3]

Between 1875 and 1963 the town was served by the North Eastern Railway built Masham branch railway.