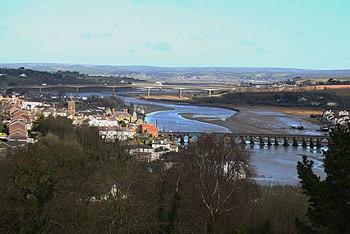 Bridges over River Torridge at Bideford

The River Torridge is a river in the north of Devon which enters the Bristol Channel in the long estuary of the River Taw.

The Torridge rises near Meddon in Devonshire, close to the border of Cornwall and close to the sea; from here it flows eat and south-east away from the coast. The river describes a long loop through Devon farming country where its tributaries the Lew and Okement join before meeting the River Taw at Appledore and flowing into the Bristol Channel.

The river is spate-dependent and often flows between wooded banks which can be steep. After heavy rain the water can be coloured.[1]

The river rises close to the border with Cornwall (north of the source of the River Tamar). Its two primary sources are Seckington Water, which rises near Baxworthy Cross, and Clifford Water, the longer of the two, which rises alongside the A39 at Higher Clovelly. These run south and join to form the Torridge at Huddisford. It then flows generally east, passing between East Putford and West Putford, and near Bradford it is joined by the River Waldon, then heads east past Black Torrington and Sheepwash. It is joined by the River Lew near Hatherleigh, and then by the River Okement near Meeth.

The Torridge then flows northwards, picking up the River Mere south of Beaford. After this it makes tight bends, and goes past Little Torrington and Great Torrington heading generally north-west. It is joined by the River Yeo at Pillmouth, and then becomes estuarine by Bideford. Between Appledore and Instow it joins the estuary of the River Taw and enters Bideford Bay.

The Torridge was the home of Tarka the Otter in Henry Williamson's book of that name.

The Tarka Trail walking and cycle route partly follows the course of the North Devon Railway, which, for a considerable distance, closely followed the line of the river. South of Bideford the railway crossed from one bank to the other, and the Trail provides a good vantage point for viewing the river.