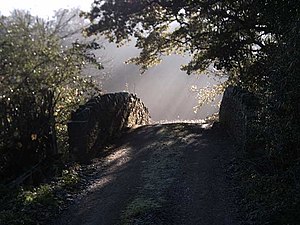 The trail crosses the Rover taw by Westacott Wood

The Tarka Trail is a series of footpaths and cyclepaths around north Devon largely in the form of 'rail trails', along the tracks of a dismantled railway. The path is inspired by Henry Williamson's 1927 novel Tarka The Otter, and it follows the route taken by Tarka in the book.

The trail in total covers a total of 180 miles, centred on Barnstaple.

The 31-mile section between Braunton and Meeth is car-free, level and mostly tarmacked, and is shared by pedestrians and cyclists, with horseriding also permitted on part of it.[1] There is a guidebook available for this section. There are twenty-one garish audio posts[2] spread out along this section of the Trail, each with an information plaque and QR code.

The remainder of the route covers a wide variety of landscapes, including wooded river valleys, moorland, coastal cliffs and sandy beaches. Walking varies between easy through to moderate and strenuous, depending on the location, but, in general, it is comprehensively waymarked.

The trails are a popular tourist destination and bicycle hire businesses are available for those who wish to cycle along suitable sections of the trail. A section of the Trail is part of National Cycle Network route number 27 and forms part of the route known as the Devon Coast to Coast Cycle Route]] a route of 99 miles[3] from Ilfracombe to Plymouth largely using former railway lines. 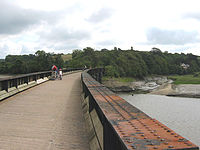 The Tarka Trail crossing the River Torridge south of Bideford

The Tarka Trail was established in 1987 as part of the Taw/Torridge Country Park using the disused railway line between Barnstaple and Bideford.[4] The railway line was purchased for £515,000 in 1986-87 from British Rail.[4] In 1989, the remainder of the line between Bideford and Meeth was acquired in its entirety by the Council for £1, and converted with a great deal of taxpayers' money, largely to adapt and repair bridges across the River Torridge.

The section between Barnstaple and Bideford was opened on 21 May 1991 and was made into a combined footpath and cyclepath. The section from Barnstaple to Meeth was named the Tarka Country Park.[4]

Once the southern circuit was also incorporated, the Trail spanned 180 miles. It was opened by Prince Charles in May 1992.[4] The Tarka Country Park identity was finally subsumed by the Tarka Trail in 1994.[4] The route to Meeth was converted into a cycle/walkway in 1997. It was delayed by a quarry covering the line of the old railway.[4]

Several sections of disused railway line have been utilised to create the trail. These have the benefit of being relatively flat, with only small uphill and downhill gradients. The paths also run across many former railway bridges, which command notable views over various rivers and valleys. A number of the stations on the route have been restored or rebuilt.

Below Braunton, the path follows the western bank of the River Caen, which was straightened to become the Braunton Canal in the 1850s, before following the northern edge of Horsey Island, reclaimed from the estuary at the same time.[5] The path then turns north along the eastern edge of Braunton Burrows, an extensive sand-dune system leased by the Ministry of Defence for army training. The dunes are closed for 10 days a year for this purpose.

The Tarka Trail passes through numerous towns and villages, including:

A number of other local walking routes intersect or coincide with the Tarka Trail: