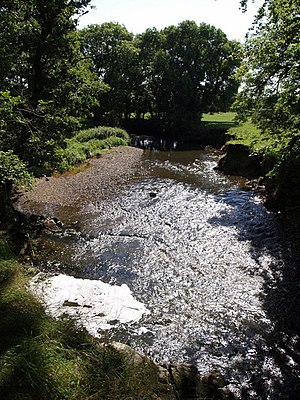 The River Lew close to is meeting with the River Torridge

The 'River Lew is a little Devon river which is a tributary of the River Torridge.

The river rises just south of the village of Beaworthy, and flows east, then turns north to run past Hatherleigh before joining the River Torridge about half a mile north of the town. Its name is incorporated into that of the village of Northlew.

The river is one of two rivers in Devon of the same name; the other, also called the Lew Water, is a tributary of the River Lyd further south, and at their nearest point the two rivers are not much more than six miles apart. Ekwall derives the name of both rivers from the British language Lliw, which in modern Welsh means 'colour'.[1]