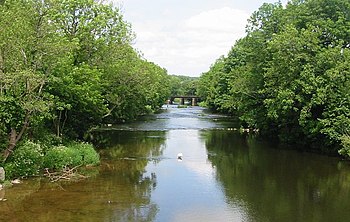 The River Taw at Umberleigh 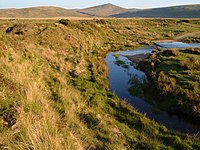 A meander on the River Taw

The River Taw is a river of North Devon. It rises at Taw Head, a spring on the central northern flanks of Dartmoor and reaches the Bristol Channel 45 miles away on the north coast of Devon at a joint estuary mouth which it shares with the River Torridge.

As it heads north, the stream gives its name to the villages of South Tawton and North Tawton, the latter the adopted home town of the late Poet Laureate Ted Hughes. The river picks headwaters up from a number of tributaries, including the Lapford Yeo, the Little Dart River and the River Mole, which rises on Devon's other upland area, Exmoor. The river increases in size and becomes a recreational trout river before becoming tidal at Newbridge, approximately 12 miles from the sea. This journey passes through rural Devon, the river flowing through pasture and wooded valleys.

The river shares the large tidal ranges of the Bristol Channel and daily changes of water depth of 20 feet are common near its mouth. This effect can also be seen in changes to the tidal-estuarine basin. Over a length of 5 miles, the river's channel widens from approximately 22 yards at Newbridge to 820 yards by Fremington.

At Barnstaple the Taw is joined by the Barnstaple Yeo, which is tidal for a short distance inland. Seawards of Fremington, the River Caen joins the river on its north bank. This tributary was made navigable as the Braunton Canal in the early 19th century. 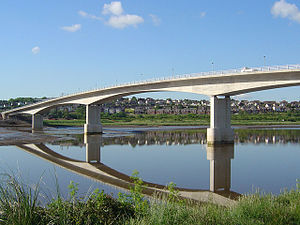 The Taw also gives its name to Bishop's Tawton just before passing through the only town on its route, Barnstaple. The Long Bridge here, originally mediæval, is the second-lowest bridging point of the Taw. Work has now finished on the long-awaited 'downstream bridge', part of the Barnstaple Western Bypass and now the Taw's lowest crossing point; it was opened in May 2007. Seawards of Barnstaple, the river's journey is blocked by the large dune complex of Braunton Burrows, hence its late diversion south-westward and shared estuary mouth with the River Torridge across Zulu Bar sandbanks and out into Barnstaple (or Bideford) Bay.

The second lowest port on the Taw is Fremington. Between the mid-nineteenth and mid-twentieth centuries its tidal quay was the busiest port (tonnage) between Bristol and Lands End, mainly as it was a handy landing point for Welsh coal shipped across the Bristol Channel which could be distributed around the south-west peninsula by train (track finally closed 1987). The lowest port (or at least jetty) can be found at Yelland. The site of a coal-fired power station (closed 1984; demolished 1989), it still is used as a tanker-distribution centre for commercial and domestic petrol and diesel deliveries. The oils storage tanks here are filled from coastal lighters.

The flooding of the Taw in August 1983 and the destruction of the sand dune causeway to Crow Island at the southern tip of Braunton Burrows was the unlikely inspiration for Ted Hughes' poem to commemorate the christening of Prince William, son of Prince Charles.