Llanbradach is a village in Glamorgan, less than three miles north of the town of Caerphilly.

It is mostly residential, and contains three pubs, a primary school, a small local shopping area, a recreation ground, a library, two doctors' surgeries, and a youth centre. Being a traditional long and narrow South Wales Valleys village, its potential for expansion is restricted by the river on its eastern side and the hillside to the west.

The village is served by Llanbradach railway station on the former Rhymney Railway line.

Ordinarily, Llan means church or parish, but in this case the origin of the name may come from "Nant Bradach", which means "the banks of river Bradach" ("Bradach" is an Irish word meaning robbing or pilfering). Alternatively, the Welsh word "brad" (treachery or deceit) could have been coupled with the Irish "-ach" suffix (stream or river), creating "a treacherous stream" – possibly one that is prone to sudden, destructive floods. The name is thought to have come into being from around 1597. It is usually taken to be a hybrid Welsh and Irish Name, Nant-Bradach as above, which would indicate a period long before 1597 (when the Llanbradach Fawr farm and house is mentioned), when the Irish ravaged the Glamorgan coast and the Holms, leaving names around (Rheliw'r Gwyddyl).

Llanbradach Colliery was opened in the 1890s, and reached peak production in the 1930s, but was shut down in 1961. A number of old mine buildings are still visible to the rear of the village.[2]

The Barry Railway circumvented the town of Caerphilly, and crossed the Rhymney Valley by means of the Llanbradach Viaduct. The construction of this viaduct, near Pwllypant, was crucial to the establishment of the busy coal port at Barry, which dealt with nearly 4,000 ships a year at its peak.

The Llanbradach viaduct was de-commissioned in the early 1930s, and was removed to be sold for scrap in 1937, as was the Penyrheol Viaduct. All that remains is a single brick arch toward the western end of where the viaduct had been. A short part of the trackbed can still be seen near Energlyn. The rest of the trackbed was incorporated into the A468 Caerphilly bypass road. The line carried on through Ty Rhiw, and on to the Walnut Tree Viaduct, which itself was largely dismantled in 1969. It was originally built, along with the Garth tunnel, for the Barry Railway's Cadoxton to Llanbradach line, and the viaduct eased the incline between the Taff Valley and Caerphilly for heavy goods trains. There were no formal passenger stations along this stretch. 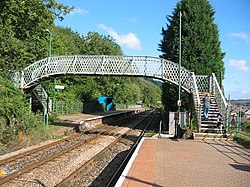 When the route closed in 1958 as part of the national re-organisation of the railways, the subsequent destruction of the Ty'n y Caeau signal box meant the loss of the viaduct in 1965. All that remain are an abutment, an angled pillar and the Taff Bank pier. The latter structure was used in 1977 for the display of messages of goodwill for the Silver Jubilee of Queen Elizabeth. Most of the remaining trackbed is now incorporated into the Taff Trail.

The original Llanbradach Workmen's Institute, was a Miners' institute built in the 1900s, was constructed of timber and corrugated iron, and previously fulfilled the functions of village hall, school and a place for religious gatherings. A committee was set up in 1910 to organise the replacement of the old structure with a modern stone building. The new building was opened in 1913, and among the amenities available to the workmen were a snooker room, a small cinema, and a reading room and library.

The hall remained in use certainly until the early 1980s (albeit in a declining state). It housed the village library, a billiards room, possibly a boxing gym and for theatrical productions by the local Coed-Y-Brain school. It was demolished at some point around the turn of the 21st Century and is now a car park.

Rugby union, netball, bowls[4] and hockey are other popular sports in the Llanbradach locality.