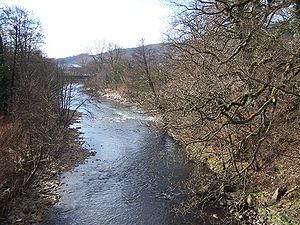 The River Cynon is one of the larger tributaries of the River Taff, flowing from its source in Brecknockshire to join the Taff in Glamorgan.

It arises within Cwm Cadlan in the Brecon Beacons National Park as the Nant Cadlan and is supplemented by a number of small streams arising from springs in the Carboniferous Limestone and Twrch Sandstone in the vicinity of Penderyn. The spring of Llygad Cynon is a notable example. However the young river soon crosses into the Carboniferous Coal Measures as it passes through Hirwaun. Here it forms the border between the counties of Brecon and Glamorgan. It is crossed by the A465 Heads of the Valleys Road near the former Tower Colliery. After Penywaun the river becomes wholly within Glamorgan where the remainder of the valley is strongly marked by the signs of past industrialisation including colliery waste tips, the relics of a large smokeless fuel plant at Abercwmboi which includes the remnants of a tip that burned out of control for many years. The river passes in a south-easterly direction through Aberdare, Mountain Ash and Penrhiwceiber before eventually meeting up with the River Taff at Abercynon.

The quality of the river has improved dramatically following the closure of the coal industry and the demolition of the smokeless fuel plant, but these closures had significant financial and social impacts on the communities in the valley and local priorities may be more focussed on social re-generation than environmental improvements to the river.