Penrhiwceiber is a former coal-mining village and parish in Glamorgan. It lies a mile south of the town of Mountain Ash and is one of many villages in the Cynon Valley. To the east of the village lies Mynydd Twyn Brynbychan which is around 1,500ft above sea level; the village is one of the steepest in Wales, and possibly the United Kingdom.

Penrhiwceiber if from "Pen-y-rhiw-ceibr" which is the Welsh for (“(the) top/end (of) the hill/slope/rise (of) the joist/beam/rafter”). The reason for this name is because there once was an avenue of trees on Llanwonno Road. This reflects the early character of the district, which up until the last twenty years of the 19th century was a heavily wooded area with steep sloping mountainsides being covered by Penrhiwceiber Woods. However the woodland nature of the district was to change with the arrival of the coal industry as the woods were felled and a colliery and terraces of houses took their place. 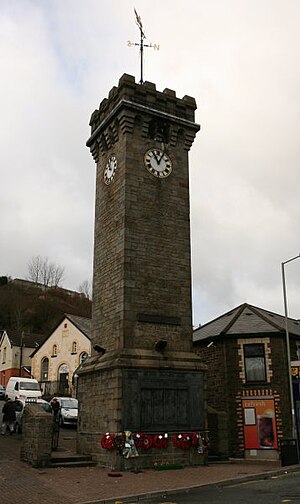 The school primary school in the area is Penrhiwceibr Primary School which was originally built in 1881 which provides further evidence as to the rapid growth of the village, with it having to be enlarged on three separate occasions in 1893, 1895 and 1901.

This growth was to continue into the 20th century until in 1920 the Kelly's Trade Directory was able to list over one hundred commercial properties for Penrhiwceiber, as well as railway stations on both the Great Western and Taff Vale railways, religious buildings including Carmel Chapel (1880), Moriah Chapel, Bethel Eglwys-y-Wesleyaid (1884), Saint Winifred's Church (1883), and the Penrhiwceiber Workmen's Hall and Institute built in 1888.

In Penrhiwceiber there is a clock tower memorial that was erected in memory of those who died while serving in World War I, World War II and the Korean War.

Penrhiwceiber Workmen's Hall and Institute was opened in the village in 1888 and restored in 1992. It remains one of the most prominent landmarks in the village.

Penrhiwceiber was an important area for coal mining for the first half of the 20th century, it was home to two Coal Mines, which were:

Penrhiwceiber falls within the ecclesiastical parish of Llanwonno, Church in Wales. The local St Winifred's Church was built in 1883.

The other church, All Saints (Tyntetown), was built in 1903 to serve the two communities of Tyntetown and Ynysboeth. Originally a daughter church of Penrhiwceiber, it became an independent parish fairly early on, before rejoining Penrhiwceiber in 1972.[1] There used to be a Salvation Army corps in the village.[2]