Abercwmboi is a village in Cynon Valley of Glamorgan. It lies on the B4275 Cardiff Road - the old main route to Cardiff before the A4059 road was built - between Aberdare and Mountain Ash. It is the most south-easterly named settlement that for postal reasons comes under the town of Aberdare.

It is one of the last remaining villages in the Cynon Valley that retains a village identity. As a result, it is a very close and friendly community. Many families continue to remain within the community and have a great sense of belonging. 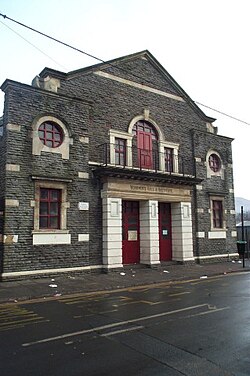 A yearly village carnival was once held in the village. Every street would work on a 'float' and a theme. Then these floats would parade around the village and fete would follow in the local school. The winning float would then join the Aberdare carnival in the summer, and hope to win that parade. This tradition stopped in the 1980s.

Abercwmboi and the closure of its phurnacite factory feature in the book Among Others by Jo Walton.

The name Abercwmboi is from the Welsh language (aber) =mouth of the, (boi) = boi - name of a stream, (Cwm) valley - mouth of the Boi valley. It is possibly named after a stream that runs through the village and on through Glenboi.

Before 1905 the village was named Capcoch (red cap). The primary school and local pub / Inn still have the name. The remains of the original Cap Coch Inn, can be found on the mountainside, above the village. The first streets to be built in Cap Coch were, John Street, Jenkin Street, Mary Street, Margaret Street, Richard Street and William Street. The beginning of Park view terrace near to the school, was also built near this time. The village boasted two main chapels, both of which carried out their services through the medium of Welsh - Bethlehem and Bethesda Chapels, of John Street.[1]

There were large lakes near to the village which used to boast swans, &c. Lord Aberdare would ride around these lakes and catch some swans and ducks. Much of these lakes have since been removed. The largest was filled in by the 'Macleans tip', and factories have since been built upon this area.

Remains of the Abercwmboi colliery can still be seen on the mountainside above Bronallt Terrace and close to 'Peggy Pit's' house.

'Parry's Bakery' was a famous bakery, found in Bronallt Terrace and was visited by hundreds of people from all over the Cynon Valley and beyond. Back in the 1940s the village boasted over 40 shops throughout the village, from Mr. Tom Jones' shop, to the Co-op, to Beynons shop etc.

There are still many remains of Abercwmboi's industrial past. The levels behind Park view Terrace and the remains of the colliery behind Bronallt Terrace. The 'Brick works' in Aberaman (old Aldi site), would have employed many from the village too. Pipes and brickes were made there. Also the Phurnacite lands are still evidence of the past of the village. This has since become a haven for wildlife in the area.

Abercwmboi was also called 'Little Moscow' by many local people in the valleys during the 1920s miners' strike. Abercwmboi was hit badly, economically at this time and many of the miners left to look for work elsewhere. There was much fighting &c., and the police and army were called in to help control the miners in Abercwmboi at this time.[2]

Many people from the village were also involved in the choir conducted by 'Caradog' (the statue of him can be seen in Aberdare town centre). Many people went to London to the Crystal Palace with him and won major competitions.

There have been many Iron Age finds in the Abercwmboi area over recent times. This proves that the area has been inhabited for thousands of years.