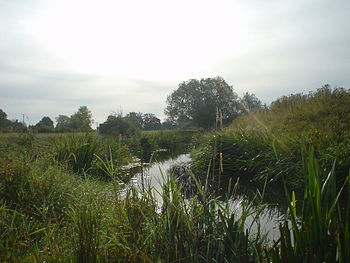 The Adur, downstream from Wineham Bridge

The Adur is a river in Sussex. The river was formerly navigable for large vessels up as far as Steyning, where there was a large port, but over time the river valley became silted up and the port moved down to the deeper waters nearer the mouth in Shoreham-by-Sea.

The name Adur is a relatively recent invention, of the 17th Century, based on the name of the Roman fort Portus Adurni which was mistakenly believed to be at Shoreham. The river had previously been known as the Sore.[1][2]

The Adur begins as two separate branches, the western Adur and the eastern Adur, which meet just west of Henfield at Betley Bridge.

The eastern Adur rises at Ditchling Common, in Sussex and flows south. Its is swollen by another major stream at Twineham, and at Shermanbury, the eastern Adur is fed by the Cowfold Stream. The Normal Tidal Limit is just below this at the footbridge near Shermanbury Church although a weir just above the confluence with the Western Adur means that only the highest tides reach here. Up to the early 1800s boats could navigate to Mock Bridge where the A281 crosses the Adur.

From west of Henfield, the two branches of the river meet, before flowing between Upper Beeding and Bramber, past Coombes, through a gap in the South Downs near Lancing College where the Adur is fed by the Ladywell Stream. The river continues on to the English Channel at Shoreham-by-Sea. The mouth of the Adur is now two miles from the town centre of Shoreham due to longshore drift.

The Baybridge Canal uses part of the Adur's watercourse.

The Adur valley forms the heart of the Bramber Rape. The Rapes of Sussex are typically centred on a river and river port and guarded by a castle. The Rape of Bramber is centred on the port of Bramber and the River Adur, with Bramber Castle located close to the river. At various times in the Midlee Ages, Bramber, Steyning and New Shoreham were all major ports on the river.[3] The western Adur also flows close to Knepp Castle, near Shipley.[4]