The village sits at the foot of the South Downs, around a crossroads with Brighton to the south, Burgess Hill and Haywards Heath to the north, Keymer and Hassocks to the west, and Lewes to the east. It is built on a slight spur of land between the Downs to the south and Lodge Hill to the north. Ditchling Beacon, one of the highest points on the South Downs, overlooks the village.

Ditchling Common, north of the village, is the source of the eastern River Adur which meets with the western River Adur near Henfield and flows on to the English Channel at Shoreham-by-Sea.[1]

Ditchling's name is Old English, from Dicelingas, meaning in essence 'Dicul's people' after an otherwise unknown founder or his clan. The village is first recorded in 765 as Dicelinga (dative plural) in a charter of King Ealdwulf (the last King of the South Saxons) by which he granted land bordering that of Ditchling.

King Alfred the Great held lands of Ditchling as a Royal Manor. Alfred left it in his will to a kinsmen named Osferth, and it reverted to the Crown under Edward the Confessor.

After the Norman Conquest, the land was held by William de Warenne. The Domesday Book mentions a church and a mill in Ditchling and the population was approx 150 households. In 1095 there is mention of a manor house, what is now Wings Place. The land passed through several hands until in 1435 it was owned by the Marquess of Abergavenny who held it until the 20th century, when it was sold to developers who failed to get planning permission to build.

In the 18th and 19th centuries the Old Meeting House in Ditchling was an important centre for Baptists from the wider area, whose records and memorandum books allow a unique insight into a small rural religious community of the period. These records bear witness to often fractious and heated debates about morality and religion.

The village hosted an artistic community founded by the artist Eric Gill during the early 20th century, and known as The Guild of St Joseph and St Dominic.[2] It survived until 1989.

In the 1960s, Ditchling's tithe barn was dismantled and moved to Loughton, where it now forms the Corbett Theatre on the campus of the University of Essex.

There are two public houses, The Bull and The White Horse and the café/eatery Ditchling Tea Rooms (previously known as Dolly's Pantry). It has a few shops. Ditchling has community groups and societies, including the Ditchling Film Society and the Ditchling Singers. 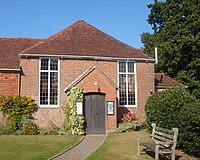 Ditchling has a long history of Protestant Nonconformism.[3] The village has four extant places of Christian worship and one former chapel.

St Margaret's Church was founded in the 11th century. The fabric of the flint and sandstone building is mostly 13th-century, although the nave is original.[3][4]

In 1740, a chapel , the Old Meeting House, was built on the side of a late 17th-century house off East End Lane. It is now used by a Unitarian congregation.[4][5]

Emmanuel Chapel was built in the early 20th century but may have had a predecessor elsewhere in the village.[3][4]

There are two Sites of Special Scientific Interest of biological importance within the parish of Ditchling:

The Guild of St Joseph and St Dominic

Eric Gill, the sculptor and letter cutter, came to Ditchling in 1907 with his apprentice Joseph Cribb and was soon followed by other craftsmen. In 1921 they founded the Guild of St Joseph and St Dominic, a Roman Catholic community of artists and craftsmen, inspired by ideas of the mediæval guilds and the Arts and Crafts movement. The community had its own workshops and chapel, and thrived for many years. Its affairs were finally wound up in 1989, and the workshops demolished.

On television and in books