Ravensworth is a village and civil parish in the Holmedale valley, in the North Riding of Yorkshire. It is approximately 4½ miles north-west of Richmond and ten miles from Darlington. The parish has a population of 255, according to the 2011 Census.[1]

The civil parish originates as a township of the ancient parish of Kirkby Ravensworth, with the parish church situated in the adjacent township of Kirby-on-the-Hill. The village itself has ancient origins dating back to the time of Viking settlement. It contains the remains of the 14th-century Grade-I listed Ravensworth Castle, the ancestral home of the FitzHugh family. After the cessation of the FitzHugh line the castle was abandoned, and it began to be dismantled from the middle of the 16th century. although the gatehouse remains almost wholly intact. There are a number of listed buildings situated around the village green, mostly dating from the eighteenth century, many of which were constructed using raw materials from the castle.

Today, Ravensworth is primarily a commuter village, and the historically important agricultural sector now employs only a small number of people. Stone mining was once important to the local economy, and although that industry had died out by the twentieth century, a sandstone quarry was recently opened outside the village. The village is served by a primary school, a public house and a chapel, and contains a large village green.

Ravensworth is best known in the media as the home of the former international cricketer Ian Botham. The village is also known regionally for the Ravensworth Nurseries horticultural business.

The name of the village derives from the given name of Hrafn, the founder of the settlement.[2] Originally called Ravenswath, "wath" was the Old Norse word meaning "ford" and would suggest that the Holme Beck that passes through the village was forded in Viking times.[2] Hrafn was a Norse word meaning "raven", so the village was literally the ford of Raven. Its name and spelling has varied over the years: in the 11th century it was Raveneswet, Rasueswaht in the 12th century, Raveneswade in 1201, Ravenswath from the 13th to 16th centuries, and afterwards beginning to settle on Ravensworth.[3] 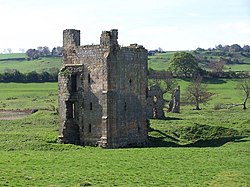 The earliest archaeological find in the Ravensworth area is a coin from the early Roman period. There has also been a number of finds from the Anglo Saxon era.

The Lord of the Manor in 1066 was Thorfin. The Lord of the Manor owned the surrounding demesnes, and the villagers were tenants of his land. The village is documented in the Domesday Book of 1086 as having 21 households, which was then quite large for a settlement.[4] There was also a church and a priest.[3] By this time, Alan Rufus had allocated the lands to his relative Bodin of Middleham.[4] Bodin later relinquished his lands in order to become a monk, and the estate was passed to his brother, Bardolph, from whom the FitzHugh line is descended.[5] Bardolph's son, Akarius Fitz Bardolph, donated lands for a monastery which were later to become Jervaulx Abbey.

A fortress was built during the reign of Henry II as the ancestral home of the Fitzhugh family, who purchased the land from the nuns of Marrick Priory.[6] The fortress would have offered protection to the local population during Scottish raids from north of the border. King John was entertained there in 1201.[7] The Fitzhughs were appointed barons on 15 May 1321. Ralph de Greystoke, 3rd Baron Greystoke, was born in the castle, home of his uncle Henry, Lord Fitzhugh, on 18 October 1353.[8] Henry FitzHugh, 3rd Baron FitzHugh was appointed Lord Chamberlain of the Household by Henry V. Henry Fitzhugh built the now Grade-I-listed Ravensworth Castle in 1391 on the site of a previous fortress from the 11th century, and also received licence to enclose 200 acres of land around the castle to make a park.[3][9] Robert FitzHugh became Bishop of London in 1431. After the end of the Fitzhugh male line in 1513, ownership of the castle and estate was passed through the female line to Sir Thomas Parr. Following his death, it passed to his son, a minor, William Parr, 1st Marquess of Northampton by which time it was ruined, largely as a result of being quarried for local building materials.[9] It passed to the Crown Estate in 1571 after Parr died without issue.[10] The castle began to be pulled down in the middle of the 16th century, shortly after the visitation by the antiquarian John Leland, however almost the entirety of the gatehouse remains intact.[3][11] In 1629 the estate was conferred from the Crown to Edward Ditchfield.[12] In 1633 it was sold to the Robinson family, who later sold it to Thomas Wharton, 1st Marquess of Wharton in 1676.[13] It then passed to Wharton's son Philip Wharton, 1st Duke of Wharton, before passing through his sister to Robert Byerley.[3] By 1779 the estate belonged to the Legard Baronets.[14]

Ravensworth was historically the largest settlement in the ancient parish of Kirkby Ravensworth. The ancient parish encompasses an area of 15,000 acres, including Ravensworth itself, as well as the townships of Dalton, Gayles, Kirby-on-the-Hill, New Forest, Newsham and Whashton.[3] All of these places became separate civil parishes in 1866.[15]

The parish church since 1397 has been the Church of St Peter & St Felix in Kirby Hill, situated about a mile from Ravensworth; it is believed to have been built on the site of a much earlier Saxon church.[16] The cleric and historian John Dakyn was rector of the parish from 1554 until his death four years later. In 1556 he established the Kirby Ravensworth Free Grammar School (free from external control rather than free at the point of use) and an almshouse, and his benefaction continues to fund charitable causes for the parishioners.[7] 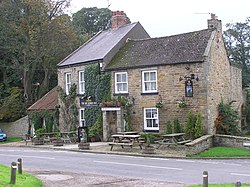 The Bay Horse Inn, which has been a public house in the village since at least 1857

The anchoress Margaret Kirkby was born in the village, possibly in 1322.[17]

John Leland, and many others since, have described Ravensworth as a "pretty" village.[3][13] There were a number of skirmishes in the area during the Civil War, and the region was a Royalist stronghold. As with many English villages, much of the housing stock consists of Grade-II-listed buildings, dating from the mid to late 17th century onwards. The poet Cuthbert Shaw was born in the village in 1738-9.[18] The astronomer William Lax was born in the village in 1761, producing A Method of finding the latitude by means of two altitudes of the sun there in 1799.[19][20] There were Inclosure Acts passed for the common fields in 1772–3 and 1776–7.[3] In 1773, Samuel Hieronymus Grimm made several sketches around the village.[21] The publisher Effingham Wilson was born in the village in 1785.[22] In 1793, a gold penny dating from around 1257 during the reign of Henry III, was found in a field in Ravensworth; at the time it was one of only two known to exist, and as of 2011 only eight are known to exist.[23][24]

Walter Scott referenced the village in "Rokeby" (1813), an epic poem set in the area. The artist J. M. W. Turner made several sketches of the castle on 13 July 1816.[25] The Wesleyan chapel was built in 1822 and is the oldest chapel in the Richmond circuit.[7] From 1834, the parish was placed within the Poor Law Union of Richmond. A national school was built in 1841.[3][7][26][27] The blacksmith's shop has been situated at the same site since 1841.[7] In 1843 the parish was described as being almost entirely agricultural.[28] The Bay Horse Inn public house dates as far back as at least 1857 (it claims a date of 1725), and its stone door case is 17th century or earlier, almost certainly built using material from the castle.[7] In 1859 "good freestone" was being quarried in the village, although a short-lived copper mine had been discontinued; the father of Christopher Cradock was lord of the manor, and the village was described as "exceedingly neat".[13][29] According to the 1881 and 1891 Censuses, agriculture and mining were the main industries.[30] In the late nineteenth century, Speight noted the great longevity of many of the parishioners, owing to the space and pure air.[31]

The village's 15th century cruck house was dismantled in the late 1970s and reconstructed at the Richmondshire Museum.[7][34] The land on which it stood was used to build the Mill Close housing estate in 1977. The former school premises became a village hall in 1987. The Post Office closed down in the mid-1990s. 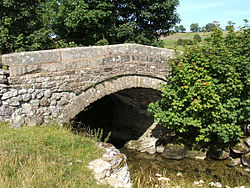 Holme Bridge, once the main bridge into the village, but since superseded

Ravensworth is 390 ft above sea level.[35] The village is situated on a slight knoll to the south of the Holme Beck (sometimes known in the past as Ravensworth Beck or Gilling Beck), a minor tributary of the River Swale in an area known as the Holme valley or Holmedale.[3] The valley was created by the Teesdale glacier during the last Ice Age. According to The Independent the village is "good walking country...surrounded by open countryside overlooked by hills and moorland."[36]

Ravensworth Nurseries is one of Yorkshire's most successful horticultural businesses.[37] Founded in 1966, it supplies garden centres and retailers across the United Kingdom as well as its own on-site sales.[38] In 1996 they erected the world's largest hanging basket.[39] The basket weighed five tons, was 23 feet across and 9 feet high and contained 1,000 plants of 100 different varieties.[39] By 2006, the business had a £1.8 million annual turnover, six acres of glasshouses and employed around 35 people.[40]

Ravensworth contains a Church of England primary school which had 68 pupils in 2010, a village hall, a Methodist chapel and a public house, described as "cosy".[41][42] A Church of England church situated at Kirby Hill, a large garden centre, a large farm shop, a five-acre caravan park and a further three public houses are all within an approximately one mile radius, although only The Bay Horse Inn is situated in the village proper. The "broad [and] pleasant" village green is substantial, at 17 acres, and most of the one hundred or so dwellings in the village are situated around it.[43] The green hosts the stone base of a 15th-century cross or obelisk.[44] There is a village quoits club that operates during the summer.

Ravensworth is situated near to the A66 and is five miles from the Scotch Corner junction on the A1(M) motorway. Its nearest railway station is at Darlington, 9½ miles away. Bus services which operate throughout the day connect the village to the nearby towns of Richmond and Barnard Castle. The village is situated close to the Yorkshire Dales national park, and is also only one hour from the North York Moors and the Lake District national parks. Newcastle and York are one hour's drive away, and Leeds is just over one hour away. A bus service runs between Barnard Castle and Richmond (and vice versa) and runs several times a day on weekdays; it is operated by Hodgson's Buses of Barnard Castle.