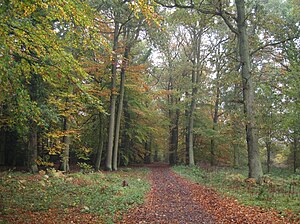 Pavis Wood is small wood in Buckinghamshire right running up to the Hertfordshire border, amongst the Chiltern Hills. It is found near the village of Hastoe, south of Tring.

Pavis Wood forms a continuous stretch of woodland with Northill Wood (to the west) and Grove Wood (to the east, in Hertfordshire, running in a line along the step Chiltern scarp. It is a woodland of deciduous trees; a rich mixture of beech, ash, oak, birch and others. Pavis Wood itself is enclosed though open to the public by permission and is managed by Buckinghamshire County Council.

Pavis Wood and its neighbour form the Pavis & Northill Woods SSSI, as ancient woodland with a very diverse ground flora and a varying species mix depending on location; it is officially noted as a habitat of poorly drained beech, oak, ash and birch grades to a beech hanger with ash and wych elm on the steepest part of the escarpment.[1]

A fine variety of plants such as the yellow pimpernel and wood mellick are found in the woods, and vlackthorn bearing sloes in autumn. A bridleway crosses the woodland, and along the edge of the wood a footpath. Here the Ridgeway National Trail and Icknield Way pass too. 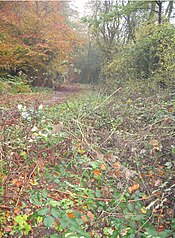 The broad bridleway from the edge of the wood and Hertfordshire's county top runs out along the top of the ridge towards the Wendover Woods and to Haddington Hill, Buckinghamshire's own county top (876 feet) just a few miles away.