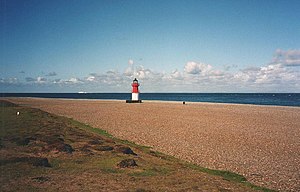 Beach at the Point of Ayre 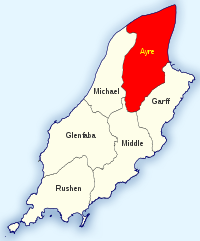 Ayre is one of six sheadings into which the Isle of Man is divided, and consists of the ancient parishes of Andreas, Bride and Lezayre.

Ayre is the northernmost of the six sheadings, reaching from the island’s northernmost headland, the Point of Ayre, inland to Snaefell.

The name of the sheading is taken from it headland, now known as the Point of Ayre, and this name in turn is from the Old Norse "eyrr", meaning a shingle beach. The word typically refers to a storm beach forming a narrow spit of shingle or sand cutting across the landward and seaward ends of a shallow bay. This may partly cut off a sheltered stretch of water from the sea to form a shallow freshwater loch.[1] This word is still in use for the particular landform in Orkney and in Shetland.