Laxey is a village on the east coast of the Isle of Man. Its key distinguishing features are its three working vintage railways and the largest working waterwheel in the world; the Laxey Wheel.

The name of the village is from the Old Norse Lax a meaning 'Salmon River'.

The village stands beside the A2, the main Douglas to Ramsey road, and on the vintage Manx Electric Railway, and Snaefell Mountain Railway. The Raad ny Foillan, the long distance footpath all around the coast of the island, runs along the coast through the village.

The river stands at the foot of Laxey Glen, a popular tourist destination in itself. Dhoon Glen too is close by. 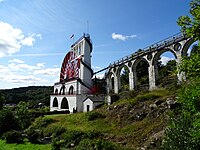 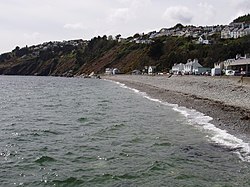 Beach and promenade at Laxey

In the 19th century lead and zinc mining began, becoming the largest industry in the village, ending in 1929. The village also had a fishing industry.

Development of the village was begun by the Lawson family, who became major landowners in the parish. From a notable Manx fishing family living in Laxey in 1800s, Robert Lawson lived with his family in "Sea Villa" on the promenade. He converted this property from a cottage into a large house, then built "Bay View Terrace" of five houses about 50 yards behind the promenade. One of his sons, Robert Edwin ("Ted") was harbour master in the 1880s. This Lawson were fishermen/farmers, were later associated with the local mining industry. During the 1700s and 1800s, the Lawsons and their relatives were perhaps one of the largest families in the Laxey area.[1]

In the late 1800s the Manx Electric Railway line was built through the village, opening it up to tourists. Other attractions were built at that time, including Snaefell Mountain Railway and the Laxey Glen Pleasure Gardens.

Laxey village is now a mainly residential and a tourist area. There are several public gardens, primarily Laxey Glen Gardens. There is also a handweaving mill which sells its own products and many others. The village has five pubs and a microbrewery, The Old Laxey Brewing Company.

The village is built around a wooded glen with a number of steep winding streets and paths leading to the floor of the glen, from where the visitor can walk by the side of Laxey River to its outflow to the sea at the small harbour, and onto the beach and promenade. One can also walk around the cliffs to the north of the beach from opposite the "La Mona Lisa Restaurant". This walk goes over the cairn (kern), from where there are views of Clay Head to the south. A Laxey man born and bred would say, "I'm going over the kern for a walk".

Many of Laxey's buildings were built as mining cottages in the traditional Manx style. To the south-east, above the left bank of the Laxey River, is the Minorca area. Old Laxey has winding streets around the harbour. A newer, late-Victorian section further-inland is the area of shops and services around the railway station. 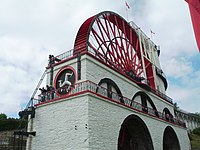 The Laxey Wheel is the village's most famous sight. It is also known as 'Lady Isabella' after the wife of The Hon. Charles Hope, then Lieutenant Governor of the Isle of Man. Originally built to serve the local mines, it is today a tourist attraction.

The wheel was built in 1854, designed by Robert Casement, to pump water from the Laxey mine shafts and remains the largest working waterwheel in the world. The wheel is 72 feet 6 inches in diameter. It revolves at about three revolutions per minute.

The mines employed over 600 miners at their peak, producing lead, copper, silver and zinc, until they closed in 1929.

The Wheel was owned by Edwin Kneale from 1939 to 1965; he saved it from being dismantled and ran it as a tourist attraction, before passing it on to the Manx people, with the agreement that it should be kept in perpetual running order for the people of the Isle of Man. In 1965 the Isle of Man Government bought the wheel and the site. Restoration work began, and in 1989 it was put under the control of Manx National Heritage.[2]

Great Laxey Mine Railway re-opened with two small steam engines in September 2004 to carry passengers along the restored route.

The Laxey Woollen Mills were founded in 1881 by Egbert Rydings, supported by John Ruskin, and were originally water powered.[3] The mills are known for producing Manx tartan which is used to make a variety of items from hats, scarfs and kilt skirts to capes and rugs. The cloth is made of fine Manx Loaghtan wool and woven on traditional-style looms. One loom operates by bicycle-power. The mills are now mainly a working shop, but still weave the Manx tartan and other cloth. The Laxey Woollen Mills also contain a busy craft shop, a tea-room, and the Hodgson Loom Gallery, which holds monthly arts and crafts exhibitions.[4] 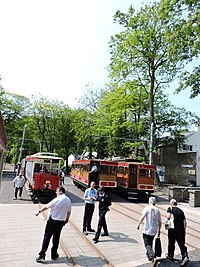 The village has a small harbour which was built in the 1850s to service the mining industry. It is now used by leisure craft and inshore fishing vessels.</ref> 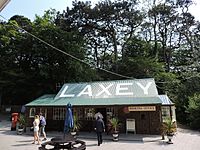 The café and booking office at Laxey Station

Laxey is on the Manx Electric Railway line, a vintage line which runs for seventeen miles along the coast, between Douglas and Ramsey. Laxey station is in the north of the village and is also the southern terminus of the Snaefell Mountain Railway which runs for five miles between Laxey and the top of Snaefell mountain. Laxey also has a short section of restored mine railway, the Great Laxey Mine Railway, which runs on steam.

Laxey is also on the route of most buses between Douglas and Ramsey.

Christ Church, the parish church, was built to a design of Ewan Christian and constructed by the Mining Company at a cost of £950. It was consecrated on 27 May 1856.[5]